In Memory of
Nell H.
Lockhart (Henderson)
1936 - 2017
Click above to light a memorial candle.
Memorial Candle Tribute From
Bopp Chapel
"We are honored to provide this Book of Memories to the family."
View full message >>>
Send Flowers
Plant a Tree In Memory of Your Loved One
Click Here
Menu 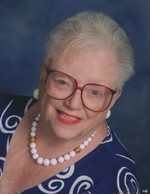 Nell Lockhart was born January 3, 1936 in Birmingham, Alabama and died April 30, 2017 in Columbia, Missouri. She is survived by her son Mark (Krysten), daughter Leigh, and five grandchildren with a sixth on the way. She was preceded in death by her parents, Homer and Nell Henderson, and her husband of fifty-six years, Reverend Jim Lockhart.

During her professional career, Nell was a high school teacher, a researcher, director of marketing, and when she retired, she was the Manager of Group Sales at the St. Louis Zoo, a position she held for 13 years. During that time, she was very active with Meeting Planners International, a worldwide professional organization that honored her with their Supplier of the Year Award in 1995 and the Chairman’s Award in 2002. She served at different times as Chairman of MPI’s Awards Committee, Education Committee, and the Ethics Committee. In addition, Nell had served as Chairman of the St. Louis Attractions Association and as a member of the State of Missouri Tourism Committee. In retirement, she devoted more time to her activities at Kirkwood Baptist Church, leading the Widow’s Might group and starting the Global Women’s chapter at the church, an international organization dedicated to connecting and empowering women to transform our world. She received the Global Women’s Global Heart Award in 2014.