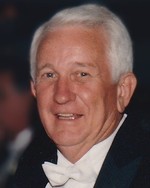 Carey L Frazier Jr, Fortified with the Sacraments of Holy Mother Church on Sunday, June 30, 2019.
Beloved husband of the late Merrill Frazier (Duckett) and the late Dorothy Frazier (Kane). Beloved husband for 38 years of Georgene Frazier (Weick). Dear father of the late Gregory Frazier and dear father of Richard Frazier, Bruce Frazier, VJ LoPiccolo, Maryann Reese (LoPiccolo), George LoPiccolo, James LoPiccolo, and Madelyn Ott (LoPiccolo). Loving grandfather to 19 grandchildren and 8 great grandchildren.
Carey was born in November of 1932, in the small textile town of Langdale, Alabama. His mother and father, Nell and Lance Frazier, were his biggest role models. His father was an athletic director and had a love for sports that he inherited, and his mother was a nurse at the textile mill who taught him his love for gardening. He had one brother, Henry, who was 9 years younger. He went to grade school and high school in Valley, Alabama. Following Valley High School, Carey attended the University of Alabama on a baseball scholarship. He was the catcher when the Tide won the SEC Championship in the spring of 1956. After graduation, he served 3 years in the Air Force where he was stationed in Tokyo, Japan. Carey went to work for the U.S. Steel Corporation in Atlanta, Georgia and was transferred to St Louis, Missouri in 1965. He went to work for Delta Gear Company in 1971 and worked for them until his retirement. Throughout his life, Carey had numerous hobbies including scouts, gardening, hunting, fishing, wood working, golf, tennis, Alabama football, Cardinal baseball, and being the best Papa to his children, grandchildren and great grandchildren. In Papa’s own words in a letter written to his granddaughter, Grace, “You can take the boy out of the country, but you can’t take the country out of the boy. I believe in God just like you do. I trust Him to guide me and lead me through life so I can contribute some good for others while I’m living the short span we are given.”

Services: Visitation on Friday, July 5th, at Incarnate Word Catholic Church, 13416 Olive Blvd., Chesterfield, from 9:15 -10:30 a.m., immediately followed by 10:30 a.m. Funeral Mass. In lieu of flowers, please send donations to the Mercy Health Foundation, Mercy Heart and Vascular Hospital.
The family of Carey L Frazier, Jr. would like to thank you for celebrating his life and remembering his spirit. Roll Tide Roll.