In Memory of
William Edward
Gough
1951 - 2019
Click above to light a memorial candle. 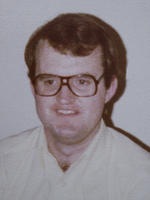 William E. Gough was born on 9-2-1951 to Elizabeth Gough and the late William W. Gough. He passed away on Saturday, September 7th. Bill is survived by his wife, Lisa Lord Gough, his sisters Kate Stewart (Gary), Ellen Gough (Dennis Dufer), and his brother Daniel Gough. Bill was preceded in death by his sister Maggie Huxhold (John). He is also survived by his many nieces and nephews including Jack and David Trotter, Jean Hall, Mary and Lilly Huxhold and Taryn and Connor Gough.

Bill was a generous uncle, proud Teamster, and an amiable co-worker during his career in the warehouse at Allen Foods. He could be counted on to remember even long-ago family celebrations and other events perfectly, down to the last detail—about how many attended, and what the temperature and humidity were that day. With his knack for trivia he could beat Google to an answer every time. He would have made a terrific Jeopardy champion.