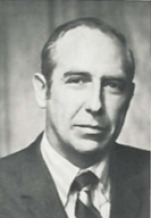 In Memory of
Harry Noble DeFoldessy
Fisher
1931 - 2019
Click above to light a memorial candle.
Memorial Candle Tribute From
Bopp Chapel
"We are honored to provide this Book of Memories to the family."
View full message >>>
Send Flowers
Plant a Tree In Memory of Your Loved One
Click Here
Menu

Son of a Hungarian Presbyterian minister, Harry grew up in Minnesota, Iowa, and Arkansas. He earned his BA from the University of Chicago and his JD from U. of C. Law in 1953 at the age of 21. Harry was an Air Force officer at Lackland, San Antonio and at Edwards, California. There he met Joy Waltke, a St. Louisan. They were married from 1955 until her death in 1980; they had two children: Hal and Diane.

In 1957 Harry moved to St. Louis, where he joined a local law firm as a criminal defense attorney. Later he changed careers to public relations and became a principal in the PR firm Stemmler, Bartram, Fisher and Payne. In the 1980s Harry was editor of "Commerce Magazine" St. Louis RCGA's publication.

In 1981 Harry married St. Louisan Arden Mueller. Together they dedicated their energies to supporting the Community Music School at Webster University, KFUO/RAF, the Repertory Theater, and other arts programs.

Harry was a scholar-in-residence at Tantur Ecumenical Institute in Israel. In retirement, he completed his book "Luke-Acts Is a Legal Brief" and focused on Biblical translation. He also wrote plays, and directed and acted in regional productions. He recorded 150+ titles for Talking Tapes for the Blind.