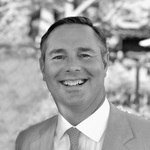 Rob led a life devoted to loving his family and friends. He graduated from St. Louis Priory School in 1988 and from the College of the Holy Cross in 1992 before returning to St. Louis. There he met the love of his life, Molly, whom he married in 2000. In school and beyond, Rob cultivated fiercely loyal friendships. Immediately after graduation, Rob joined Center Oil, where he worked for 27 years, most recently serving as President. He loved coaching his children’s basketball teams, watching sports, playing golf, hunting, fishing, and skiing. Rob was best loved for his quick wit and generous and selfless nature. His faith in the Lord was an example to those who knew and loved him.

Most of all, Rob was a cherished and devoted husband, father, son, brother, son-in-law, brother-in-law, nephew, cousin, uncle, and friend. His wife, four children, family, and friends were everything to him and will remember his unconditional love and support. Rob is survived by his beloved wife, Molly; his children, Elizabeth, Cecelia, Grace, and Thomas; his parents, Betsy Thorp (Ken) and Russell Kraeger (Betty); his sisters, Carrie Lockton (Tyler), Ann Hoover (Lon), Trisha Cheney (Matt), and Susan Burns; his mother-in-law and father-in-law, Nancy and Charles Pollnow; and many relatives and friends.

Services: The funeral Mass will be held in St. Louis on Tuesday, December 3, 2019 at 10:00 a.m. at St. Anselm Parish followed by a private burial. In lieu of flowers, memorial donations may be made to St. Louis Priory School (www.priory.org).