In Memory of
Roger Ralph
Burgdorf
1947 - 2019
Click above to light a memorial candle. 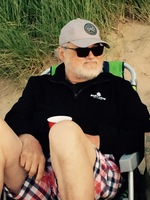 It is with great sadness that the family of Roger Ralph Burgdorf announces that on November 27, 2019, he was called home by his Lord and Savior, Jesus Christ.
Roger was born to Ralph and Ellalouise Burgdorf in Jennings MO, on March 6th, 1947. A St. Louis native and devotee his entire life, Roger developed a passion for sports both on and off the court, met the love of his life Linda, raised two incredible children, Heidi and Josh, inspired generations of children through his teaching and continually gave back to the community through his involvement in Lutheran fellowship and advocacy.
Roger and Linda met and fell in love at Lutheran Central high-school in 1963 where they graduated together in 1965. Roger attended and played basketball at Washington University and Concordia where he was a star basketball player, even making it to the “Big Dance” (NCAA Tournament) as he would say. Roger and Linda were married in 1969, lived briefly in Springfield Illinois, where he began his teaching career and family, with the birth of Heidi in 1973.
Returning to St. Louis, they welcomed the birth of their son Josh in 1975 and settled into their lifelong home in Kirkwood. Roger obtained his Masters in Education from Webster University and over the next 42 years, passionately taught and inspired generations of 4th to 8th graders, at both CCLS and Parkway schools, even having daughter Heidi as a student. Roger retired in 2010 and devoted much of his time to his four grandchildren who affectionately referred to him as Pa-Pa. In August of this year Roger and Linda celebrated their 50th wedding anniversary.
Roger was known as a dedicated friend to many, a quiet leader and kind soul who would build people up and was often referred to as a gentle giant. Roger was also a powerful story teller, always ready to share stories of his life and to hear the stories of others, particularly about the numerous events and lessons that life brings. He was incredibly well read and could talk to anyone about almost any topic, using his quick wit, infectious laugh and genuine thoughtfulness and warm demeanor to profoundly inspire and inform others.
Roger leaves a tremendous legacy, as an individual, teacher, athlete, husband, father, grandfather and a loyal and supportive friend that will be missed dearly by all that know and love him.
Please join us for a visitation at Concordia Lutheran Church in Kirkwood, Missouri from 11-1 on Monday, December 2, 2019, with a short service to follow at 1:00. In lieu of flowers, please send charitable donations to the Michael J. Fox Foundation – Help Speed a Parkinson’s Cure (https://www.michaeljfox.org/donate/donate-parkinsons-disease-research). Select Donate in Tribute and/or mail checks to the Michel J. Fox Foundation.
Donation Processing
The Michael J. Fox Foundation
P.O. Box 5014
Hagerstown, MD 21741-5014