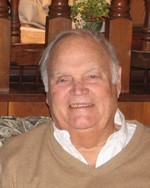 Born May 2, 1923, “Ol One Eye” was a World War II veteran whose B-17 was shot down over the English Channel and was awarded the Purple Heart. He founded W T Leonard & Associates, a manufacturer’s rep agency, in 1951, and was instrumental in the creation of the Friendship Dance and Little Brown Jug Thanksgiving traditions at Kirkwood and Webster Groves High Schools.

He will be fondly remembered as a devout Catholic, a generous philanthropist, friend and benefactor to legions, raconteur, but most of all, as a tremendous father.