Obituary for Thomas A. Tucker 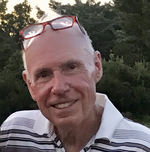 There were his daughters: Terri, Tracy, and Trudy.

Then there were the sisters’ friends who called Tom dad: Trisha and Annie and Beth and Julie and the other Julie and Natalie and more. He became their best listeners, and the Tucker family became the place they lingered after school, during holidays and on Tucker trips to the lake or the beach.

There were his Special School District teachers — Dave and Mike and the other Mike and Jane and Bill — who didn’t refer to him as dad but described him as a father figure, a big brother, a role model, a friend. He called and visited as they dispersed from their first jobs at Wirtz school to other careers and parts of the country, and they came back to sit on his couch in his house at Kirkwood’s Mendelssohn Drive, drinking beer or bourbon and swapping stories.

His net was wide and deep. It was built of high standards, even temperament, constant fellowship and a bone-crushing hug. His was not a pat-on-the-back hug. It was all enveloping. It said, I welcome you and all of you and I’m glad you’re in my life.

He had a purpose, as one friend said. And he had your back.

Memorial Visitation, Saturday, March 7, from 10:00am-1:00pm at Bopp Chapel, 10610 Manchester Rd., in Kirkwood, MO. Memorial gifts may be made to the MU College of Education, https://education.missouri.edu/alumni-giving/.

He and little brother, Ralph William, who was called Bill, shared a bedroom in the ranch house on Blue Goose Hill in Flat River. They would gather in one or two rooms when family visited, and cousin Gerry Tucker said Tom always included him even though he was much younger. Tom was an athlete. He played in the trenches in football. Tall and lanky, No. 31 helped his basketball team to a second in the regional tournament his senior year.

He graduated from Flat River High School in 1956 and headed to Columbia, where he would find two lifelong loves: Jacqueline Wilms and all things Mizzou. He joined the Alpha Tau Omega fraternity and the Army ROTC program. By 1960, he had married Jackie, earned a bachelor’s degree in physical education, and began his service; he would finish active service as first lieutenant in charge of recreational facilities at Ft. Leonard Wood and later as captain in the reserves.

After a brief stint as a high school coach in Ste. Genevieve and a master’s degree in special education from Mizzou, Tom and Jackie and the girls arrived in Kirkwood, where he would spend most of his life for a job at the Special School District, where he would spend his entire career as teacher, coach, assistant principal, principal and systemwide administrator.

Tom was a creature of ritual: the spring break Bull Shoals family fishing trip, the treks to Ste. Genevieve for Christmas trees, the weekly golf groups, the daily morning newspaper and coffee followed by workouts at the YMCA.

Principal Tucker’s ritual at Wirtz was Fridays after work with his teachers at the Creve Coeur Inn. The 5-ounce beer glasses and pitchers of Busch*. As Mike Dupper said, “we worked hard and partied hard.” As Dave Landolt said, Tom understood the importance of fellowship.

(* A note on Tom’s tastes: They evolved. There was the Budweiser bottles period. The Wild Turkey era. The wine tasting education from friends Chip and Tammy at the beach houses of his beloved Outer Banks. And, later, the sophisticated cocktails served by daughters and daughters’ spouses. His last order, at the ICU in Barnes Jewish Hospital, was for a gin and Lillet. He made sure son-in-law Wesley knew where the limes were.)

The date of Tom’s first Mizzou football tailgate remains lost to history. The last? This season. He was a decades long season ticket holder. Mike Shipp says he started tailgating with Tom the same year he was hired at Special School District. The ritual: Stop at Ben’s Butcher Shop for a pre-ordered 5-foot sub, pack up the chips and beverages in the station wagon, and head west.

They wore the colors, sometimes too well. Tom and Mike discovered sale-priced sweater vests at the Mizzou bookstore one tailgate Saturday. These were, by most objective measures, the ugliest sweaters ever known in the history of the university — which of course meant they had to buy them. Their wives walked 10 paces behind the boys on the trip to the stadium.

Everyone talks about Tom’s even temperament. At the way he would listen with his whole body. At how he seemed to have the right answer at the right moment. These words did not apply to two things: watching Mizzou sports, and his golf game.

Son-in-law John would witness enough outbursts to classify them: the tomahawk chops of club to sod and the helicopters, where the offending golf club flies into a bush, the fairway, a significant body of water. (Distance plus number of hands equaled severity.) He mellowed with age. Although the zeal of an athlete never left Tom, he would come to enjoy golf as a pleasure rather than something to conquer.

The 1812 Overture, full volume, on the Fourth of July.

There’s one more thing that must be said. Tom taught many of us how to be a parent. We watched, we saw, we learned as he led by example, so that our families could be at least a little like his.