In Memory of
Jonathan Nichols
Hagar Jr.
1925 - 2020
Click above to light a memorial candle. 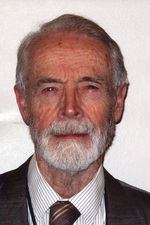 Hagar, Jonathan, only son of the late John and Mabel Grant, on January 9, 2020 at the age of 94. Jonathan attended Kirkwood High School and was a member of the Webster Groves Presbyterian Church for more than 75 years. He began his love for travel and adventure in 1943 when he hitch-hiked from St. Louis to Mexico City to attend summer school at the National University of Mexico. Jonathan earned a Journalism Degree at the University of Missouri and during the war was a London correspondent of the Stars & Stripes, published in Germany for American serviceman in Europe. There he met the Fleet Street newspaperwoman, Mary Munro, who was to become his wife.
In 1955, Jonathan and Mary returned to the Glendale home purchased by his grandfather and joined the Globe-Democrat as copy reader and picture editor. In 1966, Jonathan joined Ralph Windoes Travelogues with his first full-length productions. Jonathan and Mary went on to produce many travelogues. During a quarter of a century on the lecture platform, Jonathan made more than 2,400 appearances across the United States and Canada, from high school gymnasiums to Constitution Hall for National Geographic.
Jonathan retired but continued to travel and in 1969 Jonathan and Mary joined a booking agency and produced books for students about Romania, Italy, Central America, and others. They visited many friends and family members and always looked forward to the Hagar reunions. Friends who gathered at #10 Edwin Ave. to celebrate birthdays and holidays were always greeted by Jonathan holding back an excited dog, ready to share memories of adventures. He will be missed.
Visitation Tuesday January 14th, 4pm until time of Service beginning at 6pm at Bopp Chapel. Interment Wednesday leaving from Bopp Chapel at 10 am for 10:30 burial at Oak Hill Cemetery.