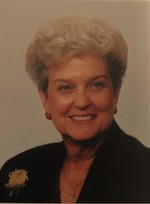 June D. (Dennehy) Eischen, 83 of St. Louis, Mo passed away with her daughters around her on January 28, 2020.
June was born in Oklahoma City, Ok to Daniel (Dee) J. and Pansy (Caldwell) Dennehy. She is preceded in death by her brother, Bernard L. Dennehy and her loving husband of 25 years, Patrick J. Eischen.

June and Pat were married in Our Lady’s Cathedral in Oklahoma City, Ok on June 29, 1957. Her husband’s career with Southwestern Bell Telephone company made for many moves—seven in total, including Topeka, Ks, Lubbock, Ft. Worth and Houston, Tx, Tulsa, Ok and twice to St. Louis, Mo. It was there that their three daughters completed their schooling. June and her family were heavily involved in the early years of St. Gerard Majella Parish in Kirkwood, Mo.

June’s life focus was her family especially raising her daughters, but she found time to work as the church secretary at St. Gerard’s. She and her husband helped to build the existing church. Her second career was in real estate. She was a member of the Million Dollar Club with Coldwell Banker.

June’s lively personality will be missed by all who knew and loved her, including her family: Patti Eischen (Tim Mulligan); Shari Eischen (Louis D’Agrosa); Dee Eischen-White (Pat White). Grandchildren Emily and Claire Mulligan, Abbie and Eric White will miss their Nonie very much.

A visitation at 10 a.m. followed by Mass at 11 a.m. will be held at June’s beloved St. Gerard Majella Catholic Church, 2005 Dougherty Ferry Road, Kirkwood, Mo on Friday, January 31. The family has asked for those attending to wear purple, her favorite color. In lieu of flowers, donations can be made in June’s name to the Alzheimer’s Association, Greater Missouri Chapter, 9370 Olive Blvd, St. Louis, MO 63132