In Memory of
Lorene Jersig
Griesedieck (Jersig)
1924 - 2020
Click above to light a memorial candle. 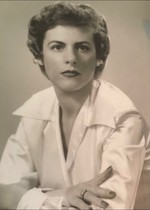 Lorene Jersig Griesedieck (known as Laurie) was born in San Antonio, Texas on August 5, 1924 to Harry Daniel Jersig and Lorraine Jersig. She passed away peacefully in her home on February 6, 2020 with family praying with her by her side. During the time that her late husband, Alvin Frank Griesedieck Jr (known as Buddy, who passed November 1,1994) was stationed at the Air Force base in San Antonio during World War II, his father, Alvin Griesedieck Sr called his colleague Harry Daniel Jersig to see if he knew of any young women his son could date while he was stationed at the base. Harry told Buddy Sr that he “happened to have an eligible daughter named Laurie.” They had a 2 or 3 dates before Buddy soon left to participate in the war, including the Normandy Invasion, which luckily he survived. When he returned from the war, he proposed to Laurie. Buddy and Laurie married on August 2,1945 at Our Lady of Grace Church in San Antonio. Together they produced and raised ten children in St Louis, MO.
Lorene had a voracious zest for life. Her love for beauty and art was expressed through her fun-flamboyant eye for fashion and a fabulous flair for interior design. She loved to dress in elegance and style, as well as help family and friends decorate their homes. Her love for the arts was creatively expressed through her passion for theatre, dance and music, as she wrote and produced an annual Christmas Play performed by and for the entire family, which became a cherished family tradition for over 25 years. The early years of the plays involved her children and their cousins. Soon after, she recruited her in-laws and grandchildren into the cast. From this cast she brought out family talent that resulted in hand-crafted scenery, costumes, music, singing, dances that she choreographed herself and acting. Each year the play was an original and different story, which she wrote herself. And while the play changed titles every year with a different story, she always included a Nativity scene of the Christ Child being born in Bethlehem, reminding us of the true meaning of Christmas. After about 30 years, when she was no longer able to produce the epic “Christmas Play”, her grandchildren and great- grandchildren voluntarily took the torch and continue producing the Nativity Scene on Christmas to this day. The play has become a precious memory we all cherish deeply. Laurie also loved playing the piano and creating beauty through her gardening.
Laurie’s legacy is her gift of grace and unconditional love, in tandem with many other special times and memories that will forever remain in our hearts. With much gratitude and love, we honor her with all the love and grace she gave us, as she is again joined and rests peacefully in Heaven with Dad, her late husband Buddy Jr, and all of their family and friends who have gone before.
Laurie is survived by her only sibling, her sister Kathleen Kuper of San Antonio, Texas; Kathleen’s three children and her ten children: her daughter Kathy Griesedieck Heinzerling and her husband Bill H; her daughter Laurie Griesedieck Ahner and her husband David A; her daughter Mary Griesedieck and her husband Jac Sperling; her daughter Nancy Griesedieck Skaggs and her husband Clayton S; her son Buddy Griesedieck III; her daughter Sarah Griesedieck; her son Thomas Jersig Griesedieck and his wife Julie Wiegand; her son David Griesedieck and his wife Barbara G; her daughter Liz Griesedieck; and her daughter Julie Griesedieck Wurdack and her husband Bill W; 23 grandchildren and 13 great-grandchildren.
And as we say Rest in Peace and good-bye to you Mom, we all say a big “Thank you for your blessings of unconditional love and grace. We already miss you dearly and we will always love you and cherish our very fine and special memories with you forever.”