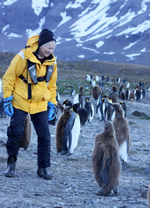 Born in Cleveland, Ohio, Nanette studied piano, dance and theatre. She attended Northwestern University Dept. of Theatre, performed at the Cleveland Play House, and was a fashion model. She lived in Lakewood, Ohio, where she taught piano for 38 years and was a member of the Ohio Music Teachers Association. Moving to Florida in 1972, she was a travel agent for 18 years in Port Charlotte and was one of the first agents to officially visit China. Her travel life-list included 108 countries with one of her last, South Georgia and Antarctica at the age of 87. Her later years were spent in Sherwood Forest outside of Brevard, NC, where she was a volunteer and water aerobics instructor. She enjoyed the international music student competitions at the Brevard music camp, with astute commentary.

A private memorial service in Brevard will be announced at a later date. Memorial gifts may be made to the Carolina Conservancy.