In Memory of
Joseph Francis
Swain
1924 - 2020
Click above to light a memorial candle. 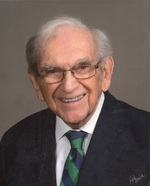 Joseph Francis Swain died February 12, 2020 in his 95th year. Born
August 5, 1924 in Columbus, Ohio, he was the son of Francis E. Swain and Marjorie (Daniel) Swain. Joe was the brother of Marjorie Evans (John) and the late Albert D. Swain. He was the beloved husband of Vivian (Hochstein) Swain for 61 years, father of Donald (Julie), Matthew (Valerie) and Elizabeth (Michael Cohen). He was "Papa" to seven grandchildren: Stephanie, Samantha, Alexis and Riley Swain; Bronwyn and Joseph Swain-Cohen; and Cassidy Swain.

Joe was reared in Columbus, Ohio and earned a B.A. from The Ohio State University. He served in WWII with the United States Coast Guard at sea as a radio man in the North Atlantic and Pacific theaters. His career in the data retrieval industry included management of sales offices in Des Moines and St. Louis. In his many years in the industry, he saw business systems and automated filing equipment evolve to stored-program computers.

Joe loved music (especially jazz) and he played tenor sax with Columbus bands when he was young. When Les Brown of the famous "band of renown" lost a sax on tour in Columbus, he borrowed Joe's sax, to Joe's delight. He treasured the times he heard and met a few great jazz artists, i.e., Joe Sullivan, Errol Garner, Art Tatum and others. He was co-founder of the Contemporary Jazz Forum in Mansfield, Ohio.

Water color painting was a favorite hobby. He painted landscapes from photos shot in Europe on many tours with Vivian. He was a serious fan of the OSU Buckeyes and St. Louis Cardinals, and a long-time member of St. David's Society of Greater St. Louis.

SERVICES: Saturday, February 29, 10 a.m. at Ladue Chapel Presbyterian Church, 9450 Clayton Rd., St. Louis, MO 63124. In lieu of flowers, donations in Joe's memory may be made to Ladue Chapel Stephen Ministry or a charity of your choice. www.boppchapel.com