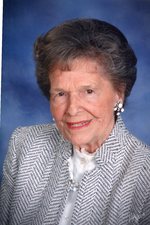 Bernice Ziegler Roemer
Age 97, passed away peacefully on February 13, 2020. Beloved wife of the late Chester “Chet” E. Roemer for 68 years. Chet was a WWII veteran, Senior V.P. of HOK, and a Fellow in the AIA. Dear mother of Robert (Paula) Roemer, Scot (Christiane) Romer, and the late Barbara Susan Roemer. Dear grandmother of Christopher, Justin (Cynthia), Kevin, and Brooke. Dear aunt, cousin, and friend to many.

Bernice was the daughter of the late Homer (Hulda) F. Ziegler who was a Vice President and member of the board of directors of Anheuser Busch. Bernice graduated from Washington University with a master’s degree in Zoology. She was a docent for the St. Louis Art Museum for 50 years and a member of the Webster Groves Presbyterian Church for 70 years. She enjoyed world travel and had many friendships over her life. She was beloved by many throughout her life.