In Memory of
Arthur Herman
Harter Jr.
1927 - 2020
Click above to light a memorial candle.
Memorial Candle Tribute From
Bopp Chapel
"We are honored to provide this Book of Memories to the family."
View full message >>>
Send Flowers
Plant a Tree In Memory of Your Loved One
Click Here
Menu 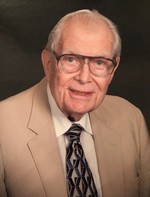 Arthur Herman Harter, Jr., 93, of Frontenac, passed away peacefully February, 20, 2020 with his family at his side.

Mr. Harter grew up in University City, son of Arthur and Adele Harter and brother to Ray. He graduated from Western Military Academy in Alton, Ill., in 1944. He attended one semester at Washington University before enlisting in the Navy. After WWII, he returned to Washington University where he majored in economics, became a member of Beta Theta Pi, made lifetime friends and met the love his life, June Harlow. They married in 1952. After college, he worked for Illinois Powder until 1959 when he opened the St. Louis offices of Snelling and Snelling employment agency.

Mr. Harter excelled in many areas. He loved music and played a saxophone in a high school band. He was an accomplished tennis player, starting at the age of 8 at University City Park and playing into his 80s. He had a heart for civic service and was a board member at Missouri Baptist, helped teens at Lakeside Residential Facility, and police and fire commissioner in Frontenac.

Most of all, he had a tremendous sense of humor. He took up skiing in his 40s and went to a South St. Louis store to buy “a one-piece ski outfit.’’ The owner said the only one-piece outfit he had was a gorilla suit and head. “I’ll take it,’’ Mr. Harter said. Soon a gorilla was skiing down Rocky Mountain slopes. He was also known to don the gorilla outfit, put on a stethoscope and white coat and visit his friends in the hospital, signing in as Dr. Ape. At Christmas, the gorilla could often be found playing his saxophone to collect money for the Salvation Army.

Mr. Harter and June loved to travel. They visited six continents. He read veraciously about other cultures and was adventurous. When Mr. Harter and June were in their mid-60s, they stayed in a cabin in the Yukon, miles away from civilization and piloted dog sleds with the dogs’ trainer as the only other human nearby.

Mr. Harter was a Bellerive Country Club Life Member. He loved sports, not only professional but those his children and grandchildren played. He was kind, caring and polite. As could be expected, the last words he spoke were gracious and considerate.