In Memory of
Harold Edward
McElvain
1926 - 2020
Click above to light a memorial candle. 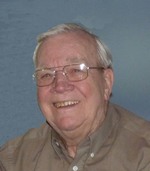 He was born and raised, the youngest of three, January 4, 1926 in Flat River, MO (now part of Park Hills, MO ) to Champ Clark McElvain and Pearl Armena (Scott) McElvain.

He attended grade school and high school in Flat River.

He volunteered for the Army after high school and, along with the flood of young men caught up in the WWII surge, was trained and shipped off to La Havre, France to protect America. He never spoke of the war much but in his later years did manage to relate some of his experiences to his family.

Upon returning home from Europe, he fell in love with Ina Mae (Priss to her friends) Baker The two were still married 68 years later when she passed. All their adult lives, they were constant companions.

After a short stay in University of Missouri in Columbia, for post war vocational training for Mac, they set off to various small towns across Southern Missouri and Arkansas in the printing industry. Eventually, they settled down in Kirkwood, MO when Mac got on with the Kirkwood Messenger newspaper. After that Mac finished his working career with the St. Louis Post Dispatch. All the while the family lived in Kirkwood on Erber Drive.

The family all attended St. Peter’s Parish in Kirkwood, the kids all attended grade school there. For 25 years there was always at least one McElvain child at the school. Maybe a parish record.

Mac was very active in the Knights of Columbus, church and school projects, scouting and kids sports. He learned to fix or repair almost anything around the house which, perhaps, led him to his retirement hobby of Mr. Fixit jobs around Kirkwood.

Mac and Priss traveled to Florida for many a Cardinal Spring Training session, traveling with a group of friends for many years. That same group traveled all over the USA and Canada for vacations and sight seeing together every summer or fall.

Mac found one of his life long pursuits helping his son earn his Boy Scout merit badge for coin collecting. His son soon got on to over things, but Mac kept it up until late in his life. Every night after work, he would pick up a bag of coins from a bank near the Post Dispatch office and bring it home to inspect at the dining room table after the family finished eating. He'd roll them up again and exchange at the bank after work the next day. Next evening, start over again.

On days off and free time he and Priss liked to run around the area garage sales. They never could pass up a bargain and we had a basement and garage to prove it.

As life slowed down for them in later years, they discovered Parish Bingo and then Riverboat Casinos. It’s said that they never saw a slot or poker machine they didn’t like; their eyes would light up at the sound of the ringing payoff bells. It put a little hop in their step – and no one was safe who blocked the shrimp at the buffet.

Mac never met a stranger - he could talk to everyone he came across. He was always willing to help with what ever problem or project you had. But for heavens sake don't leave any red in his steak.


Visitation Tuesday February 25th, 10:30am until time of Funeral Mass beginning at 11am at St. Peter’s Church, 243 W. Argonne, in Kirkwood. Burial will be at Jefferson Barracks immediately following the funeral service. Memorial Contributions preferred to the National Kidney Foundation.