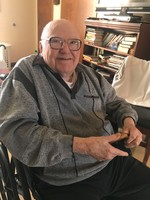 Monsignor Robert L. McCarthy, 92, of St. Louis, passed away on Saturday, February 22nd at the Mother of Good Counsel home.

Visitation and Funeral Mass will be held at St. Clement of Rome Catholic Church on Friday, February 28th. Visitation for the family will be 9-9:30 am. Friends and family are welcomed 9:30-11:00 am. The Funeral Mass begins at 11:00 am. Father Bill Thess, a terrific friend to Father, will be concelebrating and giving the Homily. Burial will follow at Calvary Cemetery. Arrangements by Bopp Chapel.

Father was born in Farmington, MO on July 15th, 1927, the fourth son (and twin to John) of Merryl and Gertrude (Finney). He attended St. Roch’s parish grade school, St. Louis University High school, and St. Louis University where he graduated with a Bachelor of Science in Commerce in 1950. He entered Kenrick Seminary and was ordained March 22, 1958, by Archbishop Joseph E. Ritter. His service in the archdiocese began as assistant secretary of archdiocesan cemeteries from 1958-78. He was also a part-time associate pastor over the years in a multitude of parishes including St. Aloysius, St. Louis Christ the King, University City, Resident Chaplain Nazareth Convent, Holy Innocents, St. Louis Christ the King, St. Bridget’s in St. Louis, Corpus Christi, Jennings and the Cathedral. Secretary (director) archdiocesan cemeteries, 1978-2008. He was Pastor of St. Frances Xavier Cabrini parish, Jennings, 1975-2000. Residence, St. Clement Parish, Des Peres. Director Emeritus of Catholic Cemeteries of the Archdiocese of St. Louis, 2008-present. Father was named a prelate of honor with the title of Monsignor by Pope John Paul ll, on September 29, 1982.

He was a veteran in the Army 301st Ordnance Heavy Machine Co. during the Korean War. Father was also involved with the St. Louis County Retirement Board serving as vice chairman 1976-1978, Chairman of the board 1978-2007.

Father Bob was Uncle to 14 nephews, 9 nieces, Great Uncle to 40, Great Great Uncle, cousin and friend to many.

Love of family and love of Church were paramount in his life. Children held a very special place in his heart. Gardening, traveling, reading, woodworking, coaching, and his dedication to the St. Louis County Retirement board as both member and chairman brought him much joy. Years ago, he began hosting a Christmas gathering for the family. Initial parties of 10 or so nieces, nephews and their parents gathered at his home at St. Frances Cabrini parish. As the years progressed and the family grew, the location of the party moved to support the growing number of family members. Friends also began joining in and it wasn’t unusual to have a crowd of 75 plus attending. The parties continued every year for over 40 years. Father so loved bringing his family and friends together. He was a gentleman, soft spoken, kind and generous. He was always there in times of need or to celebrate events in the life of his family. He baptized our children, was at our bedside in times of sickness and sorrow. And as very difficult as it was to do, he buried 3 nephews. One of his best friends, Jeanne Besselsen was instrumental in his life. She worked side by side at Calvary Cemetery with him as associate director of Catholic Cemeteries for 25 years. She was loved by him as a daughter and her love was reciprocated. In the eyes of Father’s family, Jeanne is an angel. We can’t thank her enough for all she did for Father over the years and especially the loving care and support she provided during his declining years.

Memorials may be given to Cardinal Glennon Children’s Hospital Foundation, St. Louis University High School, or a charity of your choice.

The family wishes to extend our sincerest thanks to all of you who loved Father. He will be missed.