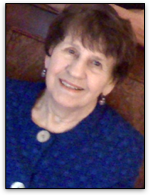 Rita Jean Maret, aged 87, passed away peacefully at home, surrounded by family, on Tuesday, February 25. She was a long-time Kirkwood resident and a St. Louis native.

Rita attended Kirkwood schools, including the old Coyle High School. St. Peter Catholic Church was the parish of her childhood, where she was confirmed, and where, in 1951, she married Robert L. Maret, the love of her life.

In 1966, after the death of Robert’s father, the two inherited a five decades old family restaurant of sorts located on Maret family property in Sunset Hills. Over numerous years, Rita and Bob created The House of Maret, building it into one of the city’s nicest dining establishments, and a cultural destination with its Sunday classical concerts in the garden. With the help of staff (which always included their children and various nieces and nephews) they operated the restaurant until retirement in 1988. In the business, Rita contributed on both the finance and management end of things, as well as with recipe formulation. It was an admirable and amiable partnership with her husband - in commerce, and in love - and a relationship to be emulated.

Rita accomplished all of this and more while challenged by polio which she contracted when pregnant with her second child. She was an amazing woman who, from the time she was stricken, struggled to regain a good measure of her mobility through sheer tenacity. She never allowed anything to get in her way of living her life just as she wished. She loved to travel, and she and Bob did so - together and with family. Summer trips to the Black River were favorites with the kids, as were trips to a Michigan lake house. And, there were trips overseas to France, Italy, and to Germany where Robert was in search of his family roots.

Rita was an avid reader and lover of good books. She formed her own book club that, at the time of her death, had been meeting and discussing for over 25 years at her home. She hosted her last book club in Jun, and even selected the next book for a meeting that she knew she would not be attending. There wasn’t a time when she didn’t have several books on her bedside, even in the last weeks of her life. Most came from her beloved Kirkwood Public Library.

Rita was a masterful knitter, producing heirloom quality work, and often choosing the toughest of patterns to turn into something wonderful for one of her children, or grandchildren. She loved a challenge (of course she did.)

Rita’s passion for cooking resulted in her writing a book “My Life as a Cook” which graces the kitchen of every member of her family and extended family. It’s a go-to resource for family favorites, many perfected in the kitchen of The House of Maret, if not her own. She wrote two additional books, a memoir and “Love Letters,” a tome that chronicles her love affair with husband Bob through their writings to each other, beginning when he was in the Air Force and away during the Korean War.

Rita was a renaissance woman in so many ways and an inspiration to her entire family, and anyone with whom she came in contact. Ever in charge, she has directed absolutely every aspect of her funeral with various family members, right down to her family’s reception menu (of course she did.)

Services will be held at St. Peter Catholic Church on Saturday, February 29 at 10:30 A.M. A one hour visitation with the family will precede the Mass of Christian Burial, in the church vestibule, per Rita’s instructions.

The family wishes to thank the nurses and aides with Pathways Hospice for their caring support during Rita’s last days. In lieu of flowers, Rita requested that donations be made in her name to the children’s section of the Kirkwood Public Library (of course, she did.) 140 E. Jefferson Avenue, Kirkwood, MO 63122