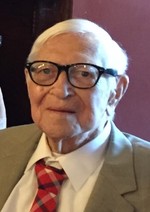 NUELLE
Ralph Edward Gerry Richard Michael Joseph Patrick Timothy.
Descended from German immigrants, Ralph aspired to become Irish (see above). Having made it halfway through his 101st year, Ralph lasted only about two weeks without his Irish “Little Princess” (B.C.K.M.Q.) On Monday, March 9, 2020.

Born in south St. Louis on September 2, 1919 to Joseph and Mary (Emmendorf) Nuelle, Ralph and his older sister Audrey (Norman) Puff and younger brother Ray (Helen) survived the Great Depression by sticking together, helping out and being the good kids that they were expected to be.

Among other things, Ralph became a devout Catholic, an electrical engineer and physicist, a skilled mechanic and repairman, a student of Native American Indian history, a card-carrying member of the St. Louis Orchid Society, an entertaining piano player and singer, a lover of opera and an avid boxing fan. Other than that, he was not very interesting.

He bemused and amused four children, Maureen (Greg) Gerard, Jim, Mike (Pat) and Matt (Bibi), who provided him with six grandchildren, thirteen great-grandchildren and three great-great-grandchildren. His life was also blessed with the fun and loving companionship of his late wife of 69 years Betty, many friendships, and – especially lately – the kind, patient and good-humored care of his family and the staff at Sunrise Webster Groves, who assisted him throughout the final stage of his life.

Visitation will be from 5:00 – 8:00 p.m. on Thursday March 12th at Bopp Chapel, 10610 Manchester Rd., Kirkwood. A funeral Mass will be at Holy Redeemer Catholic Church on Friday March 13th at 10:00 a.m. Interment at St.Peter Cemetery, Kirkwood immediately following.