In Memory of
Warren Bryant
Nelson
1922 - 2020
Click above to light a memorial candle. 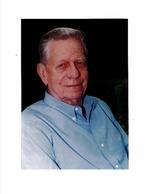 Nelson, Warren Bryant, age 97, passed peacefully into Eternal Life at his residence at Sunrise Senior Living Center of Des Peres on Wednesday, March 11, 2020. Betty Lou Nelson, the love of his life and wife of 72 years, predeceased him in 2017.

Warren was born to Oscar William Nelson and Eda Caroline (Hokanson) Nelson on September 29, 1922 in Manhattan, Kansas. He met Betty at Kansas State University, where he studied Agricultural Economics and graduated in May 1942.

On his 20th birthday, in September 1942, Warren hitchhiked to Kansas City and enlisted in the Army Air Corps. He became a navigator in the 820th Bombardment Squadron flying 52 missions in a B-25 Mitchell bomber against the Japanese occupied Marshall Islands. He achieved the rank of 1st Lieutenant and was awarded the Distinguished Flying Cross and the Air Medal with 3 Oak Leaf Clusters.

Special thanks to the staff at Sunrise Senior Living Center of Des Peres and to Kindred Hospice of St Louis, especially Tally Crosby, RN and The Reverend Jeanne Zimmerman. We also thank Pastor Emily Gillula of Trinity Lutheran Church in Kirkwood.

Warren will be buried in a private service at Jefferson Barracks National Cemetery on Friday March 20. There will be a memorial service to celebrate Warren’s life at a later date.

Donations in memory of Warren Nelson may be made to Trinity Lutheran Church, 820 Lockett Rd, Kirkwood, MO 63122, to Kindred at Home Hospice 2055 Craigshire Road, St. Louis, MO 63146, the Veterans of Foreign Wars, www.vfw.org, or the charity of your choice.

***Due to the restrictions on public gatherings during the coronavirus outbreak, the visitation and funeral services for Warren Nelson are postponed. Warren will be buried in a private service at Jefferson Barracks National Cemetery on Friday 20 March. There will be a memorial service to celebrate Warren’s life at a later date.***