In Memory of
Jack A.
Hughes
1937 - 2020
Click above to light a memorial candle.
Memorial Candle Tribute From
Bopp Chapel
"We are honored to provide this Book of Memories to the family."
View full message >>>
Send Flowers
Plant a Tree In Memory of Your Loved One
Click Here
Menu

Obituary for Jack A. Hughes 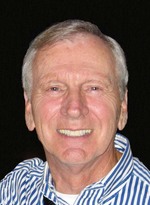 Jack Arlen Hughes, went home to our Lord and Savior, Jesus Christ, on Saturday, March 14, 2020 at the age of 82, after a nine-month battle with pancreatic cancer. He is survived by his sons and daughters-in-law, William F. Hughes (Jennifer) and Stephen R. Hughes (Mary Anne); his daughter and son-in-law, Caroline “Callie” A. Cahill (Bill); his brother, Robert (Becky); and his nine grandchildren: Forrest (Kristen), Hunter (Christina), Janie, Caroline, and Elizabeth Hughes; and Sarah, David, Andrew, and Lily Cahill. He was predeceased by his brother, Richard, and by the love of his life, Joanie, whom he has now joined in Heaven.

Born in St. Louis, Missouri, Jack grew up in Richmond Heights, attending grade school in Clayton and graduating from Ladue High. He attended DePauw University and graduated from Washington University in 1959 where he was a member of the Phi Delta Theta fraternity. Jack married the beautiful and effervescent Joan Boecker in 1962. After service in the U.S. Army, he entered the accounting profession before being drawn to the field of advertising, first at Gardner Advertising, then Brown Shoe Company and Stolz Advertising. In 1977, at the age of 39, Jack founded Hughes Advertising, Inc. Jack was always grateful to the Lord for the gift of leading him to the creative career he loved so much, and for surrounding him with a strong team that helped the agency flourish. In 2007, at the age of 70, Jack retired from what had grown to become the Hughes Group, which continues to thrive today as HLK.

Jack was a true renaissance man whose gifts and passions extended far beyond the business world. He was enchanted by the French language, people, and culture, traveling to France with Joan often for both business and pleasure. He greatly enjoyed golf, tennis, swimming, the banjo, and his barbershop quartet. At the age of 70, he took up oil painting and became a prolific artist, reflecting the glory of God’s creation in his works. He also treasured the companionship of his faithful yellow lab, Bogie.

Jack had a deep love of and abiding faith in the Lord, Jesus Christ, which was evident in the way he loved, mentored, and cared for others. A devoted husband, father, and grandfather, his wife and family were the loves and joys of his life. With a cheerful attitude, great sense of humor, and ready laugh, Jack enjoyed lasting friendships with many, including from his school and business days, church, BSF and Old Warson Bible Studies, dinner club, Michigan, fellow painters, and wonderful neighbors. He will be greatly missed by all whose lives he touched.

A Memorial Service will be held at Covenant Presbyterian Church, 2143 North Ballas Road at a date and time to be announced in future months. In lieu of flowers, donations may be sent to Covenant Christian School, 2145 North Ballas Road, St. Louis, MO 63131 or made online at ccsstl.org/community/contribute.