In Memory of
Amelia Grace
Kohlfeld (Kohlfeld)
2000 - 2020
Click above to light a memorial candle. 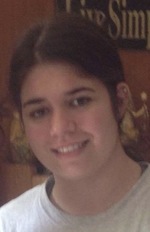 Amelia Grace Kohlfeld, 19, passed away on March 16. She was fortified with the Sacraments of Holy Mother Church.

Amelia was the daughter of Scott Kohlfeld and Lisa Kohlfeld. She is survived by her parents, grandmother Vivian Blackford, Uncle Todd Kohlfeld, and Aunt Tina Cook. Amelia was preceded into death by her grandparents Bob and Clara Kohlfeld, and grandfather Bob Cook.

Amelia attended Rockwood Schools, St. Peter Catholic School, St. Joseph’s Academy, and graduated from Lafayette High School in 2018. She had planned to further her studies in psychology. She was a member of St. Alban Roe Catholic Church. She grew up in the community of Wildwood, Missouri, surrounded by many friends. Amelia was a talented musician and artist.

A private graveside service will be held with interment at Holy Cross Catholic Cemetery. A public Memorial will be held in the near future.