In Memory of
Joanna
Truesdell (Rhodus)
1931 - 2020
Click above to light a memorial candle.
Memorial Candle Tribute From
Bopp Chapel
"We are honored to provide this Book of Memories to the family."
View full message >>>
Send Flowers
Plant a Tree In Memory of Your Loved One
Click Here
Menu 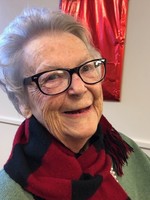 TRUESDELL, JOANNA RHODUS, 89, of St. Louis, slipped away peacefully March 26, 2020, preceded in 2009 by Jack, her husband of 55 years, and in 2017 by her two youngest children, Kim Truesdell Meuhlemann and Steve Truesdell.

High spirits and strong will defined her life. A proud daughter of Mexico, Missouri, Joanna was born Feb. 21, 1931, as the only child to Inez P. and Howard J. Rhodus, a prominent civic leader and president of Continental Bank Supply, who spoiled them both. Educated at Lindenwood University in St. Charles – then a women’s college – Joanna was a first grade teacher in the Brentwood schools when she met her future husband on a blind date to a high school football game. When he proposed over the phone, she had other suitors and told him she’d think about it. He sped up her decision by flying out to Philadelphia, where she was enjoying another of the many summers she spent with her mom’s family in a picturesque log cabin-filled lake community nearby. She met him at the airport and drove to a local landmark. “This is Independence Hall,” Joanna told him. “This is where you lose your independence. I accept.”

They married Dec. 27, 1953, in a ceremony at her childhood home. Putting teaching aside, Joanna became a homemaker who helped raise four very distinct kids – two girls, two boys – in the idyllic St. Louis suburb of Warson Woods. She was a PTA mom and Girl Scout leader, and volunteered with the neighborhood’s summer swim teams, the St. Louis Zoo, the St. Louis Symphony, and later in life, as a member of the Junior League. As a parent of Webster Groves High School athletes, she never missed a game or a swim meet involving any of her kids, and pushed an opposing team’s cheerleader into the pool for making snarky comments after a water polo defeat. The principal banned her from future games, a crushing edict; he soon relented, but thereafter showed up to keep an eye on her.

To varying degrees Joanna’s kids absorbed her loves of music, art, books, history, theater, museums and mischief. She responded by spending their inheritance dining out five nights a week with her husband at Kirkwood’s Eleven-Mile House (though to be fair, kids and grandkids often were included). At her husband’s side, she made an elegant Moolah Shrine lady; and during his two decades as a town alderman, they rode around together to check out every project to come before the planning and zoning board, allowing her to be nosy and show civic interest at the same time. It was the perfect combination. Also, she knew how to hold a rifle and hit a target, and was proud to be among the first female volunteer NRA hunter safety instructors. The determination behind her choices in life was always admirable and sometimes annoying, but she mostly knew how to laugh at herself when she was wrong. Which wasn’t often. Her husband and kids still found ways to celebrate and love her, as she deeply, deeply loved them.

She is survived by a daughter, Deb Magee, her husband Dave, and their kids Tom Magee (Lisa) and Jody Magee Brent (Scott); son Jeff and his husband Nelson Figueroa; daughter Kim’s kids Ryan Muehlemann and Maddie Muehlemann; son Steve’s daughter Megan Truesdell Hager; and six great-grandkids: Sam, Louie and Jack Magee; Allie and Charlie Brent; and Scott Hager. Burial will be beside her husband, a Korean War veteran, at Jefferson Barracks National Cemetery. Memorial contributions may be made to Shriners Hospitals for Children – St. Louis at https://www.shrinershospitalsforchildren.org/st-louis/ways-to-give