In Memory of
William Chapman
Berry Jr.
1928 - 2020
Click above to light a memorial candle. 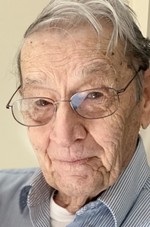 William Chapman Berry, Jr. passed away on March 26, 2020 at the age of 91. Born in July 1928 to Anne Hawken Berry and William C. Berry in Kirkwood, Missouri. He received a BA in Chemistry in 1949 from Westminster College and married Janet Alyce Nies in 1950. From 1950-52, he served as a corporal and Intermediate speed radio operator in the Army, was honorably discharged, and received the Korean Service Medal, W/1 Bronze Campaign Star, and the United Nations Service Medal. Upon returning to St. Louis in 1952, he became a chemist with Prestite, later called United Technologies, where he earned numerous patents. He retired from United Technologies in 1986 and became Technical Director of Uniseal until he retired in 1996. After his retirement he enjoyed golfing and visiting with family and friends.

A private graveside service will be held with a memorial service to be determined at a later date. In lieu of flowers memorial contributions would be appreciated to Disabled American Veterans, https://www.dav.org