In Memory of
Rehle Ann
Redmond (Sullivan)
1939 - 2020
Click above to light a memorial candle.
Memorial Candle Tribute From
Bopp Chapel
"We are honored to provide this Book of Memories to the family."
View full message >>>
Send Flowers
Plant a Tree In Memory of Your Loved One
Click Here
Menu 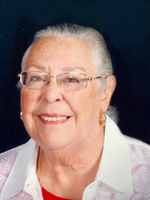 Redmond, Rehle A. (nee Sullivan). Fortified with the Sacraments of Holy Mother Church on Wednesday, April 1, 2020.

Rehle was blessed by countless memories with friends in St. Louis, Indian River Plantation in Stuart, Florida and Greenbriar. Rehle was CEO of the Redmond family for more than 50 years, an avid reader, gifted artist an aspiring golfer. A Memorial Mass will be celebrated in the future. Memorials may be made to St. Vincent de Paul Society, and the American Cancer Society. www.boppchapel.com.