In Memory of
Gordon Alaric
Grundmann
1934 - 2020
Click above to light a memorial candle. 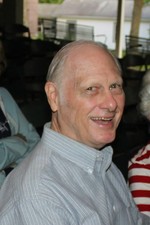 Gordon Alaric Grundmann passed away on Thursday, May 7, 2020, after a long battle with Alzheimer’s. He passed peacefully in his sleep with his daughters, Ann and Amy, by his side. He was 85. A special thank you to the staff at Aberdeen Heights for their loving care and support.

Gordon was born and raised in St. Louis, Missouri. He graduated from Washington University with a degree in industrial engineering and later worked as a project engineer for Monsanto for over 25 years. In 1957, he married the love of his life, Betty Jean Hagemann. Betty and Gordon were known for their genuine love of people and the way that their love of books and athletic and musical talents intertwined. After Betty’s passing, Gordon was reacquainted with Judy Wolters at their WashU college class reunion, and they enjoyed a loving relationship.

As for Gordon’s hobbies, he fostered his love for sports, including tennis, golf, and ping-pong and his devotion to music. These passions continued to grow as he coached (and beat) those from his children to his grandchildren in a variety of sports. Upon retirement he dedicated his time to writing music and even completed an entire musical, as well as a song highlighting his love for St. Louis. Gordon was also much loved by his summer community in Chautauqua, Illinois, where he will be remembered for his easy laughter and for creating a variety of musical and sporting events. Even when in memory care, Gordon enjoyed remembering his tennis triumphs and hearing about the successes of those he cared about immensely.

A celebration of Gordon’s life will be held at a later date. Memorial donations in Gordon’s honor can be made to New Piasa Chautauqua (please make check payable to NPCCA and mail to 12584 Fern Glen Valley Road, Grafton, IL, 62037) or Trinity Lutheran Church (mail to 820 Lockett Road, Kirkwood, MO, 63122).