In Memory of
Jacqueline L.
Reis
1929 - 2020
Click above to light a memorial candle.
Memorial Candle Tribute From
Bopp Chapel
"We are honored to provide this Book of Memories to the family."
View full message >>>
Send Flowers
Plant a Tree In Memory of Your Loved One
Click Here
Menu 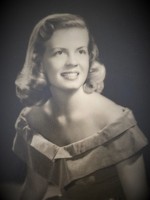 Jackie was the star who entered the world with pizazz, drama, feistiness and a spirit of excitement. Our Auntie Mame! She would gather with her cousins to play practical jokes, produce plays or initiate a neighborhood game of hide and seek! She exuded a sense of adventure and a shy coyness that drew many suitors. People were drawn to her because of her beauty, but loved conversing with her because of her knowledge and opinions of world politics. We grew up making dinner together watching the Vietnam War and our country’s social unrest. The world was changing and our dinner table was the place we wrestled with it. To Mary, Chad, and Lucy she was the most caring and protective mother a child could want or need, defending, supporting and loving us unconditionally. When we had a hard day, she would say, “Tomorrow is a new day and a chance for a fresh start. Hold your head high; you can do this!” Her spirit of perseverance and resilience to life’s challenges were a tremendous model for us all.

Jacqueline Liebermann Reis, born September 4, 1929, was the daughter of Lucille and Louis Liebermann of St. Louis. The roots of this family began in the late 1700’s when a French family ventured to the United States and settled in St. Louis. Later, German and Irish immigrants blended with these families. Our mother was so proud of this wonderful combination of cultural heritages.

Jackie grew up with her two younger brothers, Louis, Jr. (Bud) and Malcolm, in University City. She attended Jackson Park School and St. Joseph’s Academy, where she made a gaggle of fun loving close and lifelong friends. Jackie began her college career at Ward Belmont University in Nashville, Tennessee. Jackie had tremendous ‘star’ quality; a born actress. She ventured to New York City to attend the American Academy of Dramatic Arts acting in plays and television commercials. She mixed with the company of Broadway actors and movie stars, but missing home, she transferred back to Washington University where she met her husband, Charles Edwin Reis, III, whom she married in 1953. Having a competitive spirit, she became a Bridge Life Master, as well as an accomplished tennis player. Jackie began a career in real estate sales with Ira Berry/ Coldwell Banker in the late 1970’s and was honored for her sales into the Million Dollar Club. However, while competitive, Jackie was never brazen. She cared deeply about providing ethical and effective services to her clients, who appreciated her skill, diligence and positive spirit. As a party lover and creative cook, she extended her very wide group of friends who she entertained frequently!

Jackie devoted time to support local charities as a volunteer for Barnes Hospital, Cardinal Glennon Children’s Hospital, and served as a longtime board member of the Cardinal Glennon Guild. She also served as a board member for the St. Louis Christmas Carols Association. Jackie was an active planner for fundraising events at her children’s schools, both Villa Duchesne and DeSmet Jesuit High School.

Jackie and her late husband Charley are survived by her three children and spouses: Mary Reis Bussmann Lloyd, Mary’s husbands Dr. Frederick Lloyd and the late Mark Bussmann of Palo Alto, California; Charles (Chad) Reis, Chad’s wife Constance Reis of Ladue, Missouri; and Lucia (Lucy) Reis Dathan, Lucy’s husband Matthew Dathan, of New Canaan, Connecticut. Jackie was a loving grandmother to Charles and Margaret Bussmann; Martha and Lucy Reis; and William, Alexander, and Beatrice Dathan. Jackie was predeceased by her parents and brothers, but leaves behind many wonderful cousins, nieces and nephews across the United States.

Jacqueline died peacefully Wednesday, May 13 and will be missed tremendously, but remembered daily.

Her spirit of life is in us all!

The family thanks the entire staff of Cedarhurst of Des Peres for the care, warmth and love they gave to Jackie.

Due to Covid19 her memorial service will be scheduled at a later date. The immediate family gathered for an intimate funeral mass and burial this weekend.

In lieu of flowers, donations to the Cardinal Glennon Guild at https://www.glennon.org/who-we-are/guild/ or St. Louis Chapter of the Alzheimer’s Association at: https://www.alz.org./greatermissouri