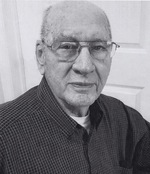 Clifford Russell Youngstrom passed away on Friday May 15, 2020, after a courageous battle with
Covid-19. He passed peacefully in hospice care at St. Luke’s Hospital. Due to the pandemic, he was tragically unable to have his loved ones at his side, but family members were able to speak to him continuously by phone to let him know of their unwavering love.

Cliff was born and raised in St. Louis, Missouri. Growing up, he lived in the Soulard neighborhood, a district in the south side of the city. He was a paperboy and sold the morning St. Louis Globe-Democrat. Cliff was an avid baseball fan and as a youngster would take a streetcar from Soulard to Sportsmen’s Park to take in St. Louis Cardinals and St. Louis Browns home games as a member of “The Knothole Gang,” a local charitable program that allowed access to home games for needy kids. Cliff followed Cardinal baseball for the rest of his life. He graduated from McKinley High School in 1943. At McKinley, Cliff excelled in track and field, and in his sophomore year, met his future wife, Barbara Kimmel.

In January 1944 he enlisted in the US Navy to fight in World War II. He shipped out to the Pacific and was assigned as 20mm gunner on the destroyer escort USS CROWLEY (DE303). His ship operated with the Third Fleet and went through the devastating “Typhoon Cobra” in December 1944. He later saw action at the battles of Leyte Gulf, Iwo Jima and Okinawa. At war’s end he witnessed the signing of the Japanese surrender, his ship moored in Tokyo Bay near USS MISSOURI.

After the war, he volunteered to accompany test ships that were taken to be used in “Operation Crossroads” (Bikini Bomb Tests), and witnessed both nuclear detonations.

Cliff was mustered out of the Navy and shortly afterward married his high school sweetheart Barbara
in 1947. They lived in Jefferson Barracks and started their family.

Cliff then began working as a cartographer at Aeronautical Chart and Information Center (ACIC) in 1948. His long career with this Federal agency spanned 33 years. His branch worked with NASA in creating orbiting charts and astronaut-related materials for the Mercury, Gemini and Apollo space programs. He retired from government service in 1981.

Cliff loved trout fishing and taught his sons the joy of wading the stream. He was the elder (and most-honored) figure at scores of glorious camping and fishing trips to Montauk State Park and Meramec Springs with his sons, son-in-law and grandsons that spanned over half a century, a legacy that will endure for many generations to come.

He was well known by all as “The Caretaker”. After he and Barb raised their family, he moved on to help the elderly members of his extended family in their final years, especially his lifetime companion, Barb. Cliff was unselfish, humble and as gentle a man as ever lived.

Cliff is survived by his wife Barbara (whom he always called his “Girlfriend”),
and six children, Gregory (Pam), Patricia (Larry), Scott (Deborah), Russell (Karen),
John (Amy) and Steven (Lori). Cliff was also a beloved grandfather of fifteen, and great-grandfather of twelve. He remained active in his family’s lives until his final days.

A glorious celebration of Cliff’s life will be held at a later date.

In lieu of flowers, memorial donations in Cliff’s honor can be made to:
The Mary Culver Home
221 West Washington Avenue
Kirkwood, MO 63122