In Memory of
Veronica Ann
Billings (Deutschmann)
1924 - 2020
Click above to light a memorial candle.
Memorial Candle Tribute From
Bopp Chapel
"We are honored to provide this Book of Memories to the family."
View full message >>>
Send Flowers
Plant a Tree In Memory of Your Loved One
Click Here
Menu 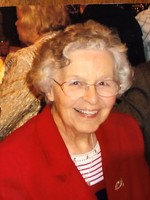 We are deeply saddened to announce the death of Veronica Ann Billings, 95 yrs.
She passed away on May 26, 2020 at the Gardens of Saint Elizabeth, Denver, Colorado. She was survived by five of her six children: Carol, Margaret, George, Raymond (deceased), Joanne, Mary Kay, her brother, Louis G. Deutschmann, and sister, Helen “Muff” Deutschmann.

Veronica was born in Des Peres, Missouri on December 28, 1924 to George and Anna Deutschmann and grew up in the family which owned the Deutschmann greenhouses, “The Wayside Florists.” She attended Ursuline Academy and upon graduation, Veronica received a scholarship to Webster College. She graduated in 1946 with a Bachelor of Science degree with a Chemistry major. Veronica met her husband, George, a World War II Veteran, at a backyard croquette game in 1944. The couple were married in the old Saint Peter’s Catholic Church on October 22, 1946. Following their marriage, Veronica and George lived in Kirkwood, Missouri before asthma prompted the young family to move to a less humid climate which they found in Denver, Colorado, 1952.

Veronica dedicated her life to the well-being of her family. (six children, seventeen grand-children and nineteen great-grandchildren). As time permitted she volunteered with the Girl Scouts, Saint Thomas Seminary Auxiliary and Parish related activities. For a number of years Veronica provided invaluable secretarial support for her husband who was President of Billings Engineering Company.

Veronica was known for her strong Catholic Faith. Her devotion to the Blessed Mother grew ever deeper over the years through her daily recitation of the rosary and the Divine Chaplet. Seeing things through the “eyes of faith,” she grew to possess a grateful heart for God’s Providential care and guiding ways.

The family would like to thank the administration and staff at the Gardens of Saint Elizabeth in Denver, Colorado for their professional services and caring manner to Veronica during her five years and a half years of residency.

May her soul and the souls of the faithful departed through the Mercy of God rest in peace. Amen.