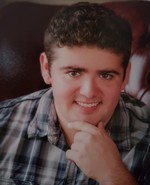 A private visitation will be held on Wednesday, June 3, from 4-6 pm followed by a private funeral service at Bopp Chapel, 10610 Manchester Rd., Kirkwood, Mo 63122.