In Memory of
Michael Leslie
Young
1943 - 2020
Click above to light a memorial candle. 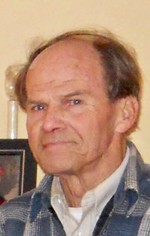 Michael was born on January 15, 1943 in Kirkwood, MO, the son of James Young and Bernadine (Tellman) Young. He married Janet J. Young in 1973, his beloved wife for 46 years until she predeceased him last year.

Michael worked as a broadcast engineer for nearly every local television station in St. Louis, including KDNL-TV (Channel 30) for over thirty years. Michael enjoyed televisions, radios, computers, electrical gadgets of all sorts, home movies, a good bargain and films about World War II (especially those starring John Wayne). He loved spending time with his grandchildren, who intrigued him almost as much as he did them.

Private funeral services will be held at Bopp Chapel in Kirkwood, MO, with private graveside service at St. Peter Cemetery in Kirkwood.