In Memory of
Mignon F.
LaMar
1927 - 2020
Click above to light a memorial candle.
Memorial Candle Tribute From
Bopp Chapel
"We are honored to provide this Book of Memories to the family."
View full message >>>
Send Flowers
Plant a Tree In Memory of Your Loved One
Click Here
Menu 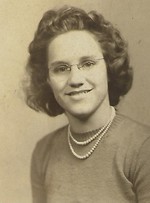 With profound sadness we announce the passing of Mignon, our loving Aunt, sister and devoted friend to all whose lives she touched, on June 4, 2020.
She left us while sleeping peacefully at her residence in Friendship Village in Chesterfield, Missouri. She was in her 93rd year.

Born in Robards, Kentucky on October 30th, 1927, she witnessed incredible changes to her world during her life. As a young teenager during World War II, she worked at Princeton Farms in Princeton, Indiana where her father was the manager.
Mignon graduated from Owensville High School in 1945.

After the war she married her loving husband Kenneth Lamar, who served as a Landing Craft pilot during D-Day. Kenneth and Mignon were married on December 26th, 1946 in Morganfield, Kentucky. Kenneth served in the Coast Guard where he and Mignon travelled and lived at various Coast Guard installations throughout the USA. Mignon and Kenneth were married for 46 years before he passed away in 1992. Kenneth is buried in Jefferson Barracks National Cemetery in Lemay, Missouri.

Mignon was predeceased by her parents Elijah Archibald Faulkner and Nona Ethel Poole Faulkner, sisters Naomi Whitmore and Jean Champagne and brothers Cosby and John.
She recently lost a very special and caring friend in Charlie Burleson in 2019.

Mignon is survived by her sisters Rubye Faulkner Smith of Princeton, Indiana and Vera H. Faulkner Roberts of Hatfield, Arkansas.
She is also survived by her many nephews and nieces and her loving friends as well as Charlie’s daughter Jill.

Mignon lived a full life as a homemaker and was a worker in the Insurance sector wherever she and Kenneth were stationed.
She loved to read and had a keen interest in all things political; national and local.

Mignon will be dearly missed and forever in our hearts.
True to her nature, Mignon had a long-standing desire to have a quiet and solemn internment next to her beloved “Ken” at Jefferson Barracks National Cemetery.