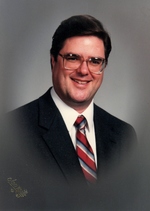 Drewing, Michael F. ("Mike"), 74,
died at his home with his loving wife by his side on June 26, 2020. He is survived by his wife Linda and his three children, David Drewing (hw Kristina), Ann Beck (hh Michael), and Amy Drewing. He was a loving "Papa" to his three grandchildren Joseph Drewing, Jennifer Drewing, and Aiden Beck.

Mike was born on June 11, 1946 in St. Louis, Missouri. He attended Ascension Grade School and CBC High School. Mike graduated with a Bachelor's Degree in Psychology and Sociology and later with a Master's Degree in Business Administration (MBA), both from St. Louis University. He and Linda were married in 1969 and recently celebrated their 50th wedding anniversary.

Before going into sales, Mike worked as a social worker for the St. Louis County Welfare Department and then as a buyer for Famous Barr. Mike has worked as a sales representative for various home furnishing lines for over 30 years until retirement.

Mike loved spending time with his grandchildren, gardening, walking, and being outdoors. He was a Trustee for the Spring Valley Subdivision for 12 years.

Donations can be made in his honor to one of the following charities: