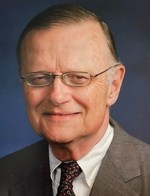 In Memory of
Robert M.
Evans
1934 - 2020
Click above to light a memorial candle.
Memorial Candle Tribute From
Bopp Chapel
"We are honored to provide this Book of Memories to the family."
View full message >>>
Send Flowers
Plant a Tree In Memory of Your Loved One
Click Here
Menu 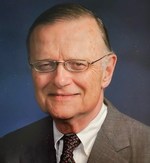 Robert graduated from the St. Louis University School of Law and practiced law in St. Louis for 58 years. He was a Second Lieutenant in the Air Force from 1956 – 58 and served in the Strategic Air Command. He helped reform the workers’ compensation laws for the State of Missouri in 2005 for which he was named a Lawyer of the Year by the Missouri Lawyers Weekly. He received the Workers’ Compensation Distinguished Lawyer Award in 2006 and was repeatedly recognized by the Missouri Merchants & Manufacturers Association for his service. Robert was most proud of his family about whom he spoke endlessly. No sacrifice was too great in the education of his children. He was a great dad and will be sorely missed.

Visitation will be held from 9:00 a.m. to 10:30 a.m. on Tuesday, June 30 at the Bopp Chapel Funeral Home, 10610 Manchester Road, Kirkwood, MO 63122. A funeral mass will follow at 11:00 a.m. at St. Clement of Rome Catholic Church in Des Peres, MO. In lieu of flowers, memorials can be made to Franciscan University in Steubenville, the St. Vincent DePaul Society, or Human Life International.