In Memory of
Irma Jean Tooke
1922 - 2020
Click above to light a memorial candle.
Memorial Candle Tribute From
Bopp Chapel
"We are honored to provide this Book of Memories to the family."
View full message >>>
Send Flowers
Plant a Tree In Memory of Your Loved One
Click Here
Menu 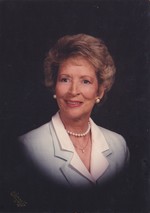 Irma Jean Tooke was born Feb. 25, 1922, in Butler, Pennsylvania, the youngest child of Louis E. and Emma Matilda (Schenk) Kramer. She was confirmed at St. Mark’s Evangelical Lutheran Church in Butler. She graduated from Butler High School, where she was the first female drum major; attended Westminster College, and graduated from Capital University with a degree in vocal music. She was active in musical events in school, church, and community.

Irma Jean’s talent and love of performing became evident very early, and she sang her first church solo when she was 4 years old, standing on a chair so the congregants could see her. Over the span of her career, she performed a wide range of music, including the title role in Bizet’s opera Carmen, and the roles of the mother in the opera Amahl and the Night Visitors (with a young Scott Bakula playing the title role), and Big Bird in a Sesame Street musical. She was the alto soloist for many years at First Presbyterian Church in Kirkwood, Missouri. In addition to her vocal talent, she was an excellent pianist and vocal teacher. She also loved to prepare and perform skits, complete with costumes and props, for family and casual events.

Irma Jean met the love of her life, Thomas H. Tooke, while they attended Butler High School. They married on Dec. 27, 1946, in Butler, and their loving relationship was the center of her life. Over the course of their marriage, they lived in Buffalo, New York; Springfield, Massachusetts; and St. Louis.

She was an active member of Epsilon Tau sorority and PEO.

In addition to her musical talent, her family and friends remember her for her charismatic presence, down-to-earth attitude, and great kindness.

Irma Jean is survived by her husband of 73 years, Thomas; by nieces, nephews, and cousins; and by loving friends.

A live-stream only Memorial Service will take place 11 am, Friday, July 24 at First Presbyterian Church in Kirkwood. Access the live-stream at www.kirkwoodpres.org. This is a live-stream only service, the church will be closed to the public.

In lieu of flowers, memorial gifts may be made to the music program at First Presbyterian Church in Kirkwood or to the charity of your choice.