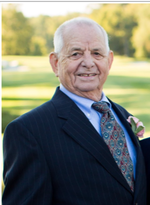 Charles was born on November 13, 1934 in Vienna, Missouri. He moved to St. Louis at age 18 and began his lifelong career in the screw and bolt business, retiring as General Manager at Natco. He spent six months in active service at Ft. Leonard Wood and five ½ years in the Army Reserve.

Charles and Helen were married on March 2, 1957 and were blessed to be each other’s dance partner for 63 years. Their four children and spouses, along with their extended families in the Vienna and Jefferson City areas and neighbors in Florissant, were an important source of joy. Charles’ greatest legacy will be his pride in his 12 grandchildren. They will lovingly remember time spent on the John Deere tractor with him and the little red jeep.

Charles, known to his friends as Charlie, will be fondly remembered for his backyard BBQ’s, manicured lawn, hand washed cars, cut off blue jean shorts, excellent washer game skills, the five o’clock cocktail and in his later years, his lazy boy chair and remote.

Graveside services at Sacred Heart Cemetery in Florissant will be private.

Donations in his memory to the Society of St. Vincent DePaul of St. Louis (svdpstlouis.org) are appreciated.