In Memory of
John L. Mozley, Sr.
1924 - 2020
Click above to light a memorial candle.
Memorial Candle Tribute From
Bopp Chapel
"We are honored to provide this Book of Memories to the family."
View full message >>>
Send Flowers
Plant a Tree In Memory of Your Loved One
Click Here
Menu 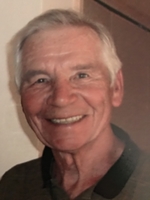 John Lyle Mozley, 95, of Kirkwood, passed away on July 17, 2020. He is survived by his beloved wife of 70 years, Vivienne, his son, John Jr., and his daughter, Carolyn Mozley Beiser. He was grandfather of John Carver Mozley, Alison Vivienne Beiser and Kevin Theodore Beiser.

John was born on September 29, 1924 in Marion, Illinois to James M., and Betty Mozley. His family moved nearly every year until he was in high school. As a teenager, he was an accomplished Sea Scout. He graduated from Webster Groves High School in 1942. He entered Washington University, but soon enlisted in the Army, and was on active duty from 1943 to 1946. He graduated infantry school in 1945, a 2nd Lieutenant, and attained the rank of Captain in the active reserves in which he served through 1956. After the war, in 1946, he returned to Washington University, earning a B.S. in Industrial Engineering in 1949. John was an active member of the Sigma Chi fraternity, through which he made many life-long friends.

John joined a St. Louis company, Star Manufacturing, in 1949 as a junior industrial engineer. He worked his way up to president of Star by 1960, a position he held until retirement in 1987. He then joined a company in Connecticut as CEO, which was renamed Mozley Manufacturing. That company was sold and he retired again in 1991. His industry was food-service equipment manufacturing and he was honored to serve variously as President, Director and Chairman of several national industry associations. Like in college, he made friends in his industry who became life-long friends.

John will be fondly remembered by his loved ones and friends as an active and adventurous man, who loved a challenge.

He had a love of flying and was an active pilot for 45 years, including doing some aerobatics in his T28 WWII-era fighter-trainer. He was active in adventure sports including: motorcycling, sailing, power boating, scuba diving, water and snow skiing, hot-air ballooning, and also some safer sports such as golf and tennis and he very much enjoyed dancing. He was an excellent navigator, in the air, on land and at sea. He enjoyed many summers with his family at Lake of the Ozarks, and more recently in Estes Park, Colorado with his grandchildren.

He was an honorable and generous man.

He was preceded in death by his parents, his brother, James Jr. and sister, Joanna Mozley Turner.

We will all miss John; a great husband, father, grandfather, friend.