In Memory of
Marsha Grace
Canfield
1940 - 2020
Click above to light a memorial candle.
Memorial Candle Tribute From
Bopp Chapel
"We are honored to provide this Book of Memories to the family."
View full message >>>
Send Flowers
Plant a Tree In Memory of Your Loved One
Click Here
Menu 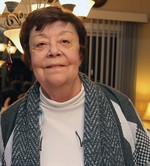 Marsha was a lifelong knowledge seeker who parlayed her boundless curiosity into a career in journalism, the seeds of which were first sown when she served as her high school newspaper editor at Normandy High School. This extra-curricular earned Marsha a Columbia Scholastic Press gold medal for high school journalism. Upon graduation, Marsha was awarded a scholarship to the University of Michigan, Ann Arbor. As a journalism major, Marsha received a McNaught Award for reporting excellence in her sophomore year.

Her career took her from the Atlanta Journal as a young intern to reporting and editorial positions at the Charlotte Observer where she received a North Carolina Press Association Award for her story about an abused child whose parents were convicted of neglect. In 1969, Marsha applied for a position at the St. Louis Post-Dispatch and was told by letter reply from the then-executive editor, “we don’t ordinarily employ women on our local staff. Come to think of it, there has never been a woman editorial writer nor an assistant city editor either. There is no purpose to be served by your coming to St. Louis to talk about a job.”

In a field where women were few, Marsha never stopped pushing the boundaries in the male-dominated news field. After the Post’s rejection, she was quickly hired at the rival St. Louis Globe-Democrat, where she worked for ten years, ascending to the Assistant City Editor’s desk responsible for supervising 50 reporters and photographers. While working at The Globe, Marsha’s interest and experience in covering city government and urban affairs grew, leading her to apply for a Fellowship in Urban Journalism at the University of Chicago. With candidates from across the country, she was only one of ten honorees to be selected (one of only two women). Upon the announcement of this award, Marsha received many commendations from distinguished St. Louis government officials, including then-Mayor Alfonso Cervantes: “As one who has read your material and has submitted to a few interviews, I know from personal experience you have done an outstanding job and always reported without prejudice.”

Marsha continued her professional career as one of the news editors at Congressional Quarterly supervising the congressional beat on stories covering transportation, health, housing, education and welfare. She finished out her storied career at the Philadelphia Inquirer where she rose to be Assistant National Editor and worked with national correspondents. Marsha was considered an expert by her colleagues on the inner workings of the federal government.

Ever the scholar, always striving to learn, read and grow, Marsha wanted to expand on her in-depth knowledge of inner-city government and urban affairs. So in 1997, she returned to academic life and began a master’s degree program in urban studies at the University of Pennsylvania. In 2001, she earned her Master of Liberal Arts with a Certificate in Urban Affairs.

Marsha was active in the professional community as well. She was involved with the Women in Communications organization (co-founder and president of the Charlotte, North Carolina chapter and member and scholarship chairman of the St. Louis, Missouri chapter). Marsha was also a member of the Society of Professional Journalists, Sigma Delta Chi, Washington D.C. chapter.

In retirement, Marsha loved to travel. Her adventures took her all around the world. In each new city Marsha would turn her journalistic eye to uncovering the hidden gems. She kept postcards, photos and little notebooks of her discoveries. On one trip to Northern France, Marsha went to the home of celebrated Impressionist artist Claude Monet. Marsha’s “notes” on Monet’s gardens at Giverny became an article for the Philadelphia Inquirer. In her downtime, Marsha also enjoyed music having played classical guitar in her younger years. In later life, she volunteered as an usher at the Fabulous Fox Theatre where she enjoyed seeing the latest shows from the aisles.

Marsha loved many pets over the years, from her dog Maggie to most recently her sweet cat Millie. Marsha was a quiet soul, but if you could get her alone, she had many great stories to tell. Her family will miss those conversations. Marsha’s family wishes to express their gratitude to the staff of Aberdeen Heights for the compassionate care they gave to Marsha over these last difficult months.

A private memorial will be held at a future date. Marsha has been interred alongside her mother, Ruth Canfield, at Holy Cross Cemetery in Ellisville, Missouri.

In lieu of flowers, please donate to the Urban League of Metropolitan St. Louis | www.ulstl.com or the Animal Protective Association | www.apamo.org.