In Memory of
Shirley A.
Alexander (McVey)
1932 - 2020
Click above to light a memorial candle.
Memorial Candle Tribute From
Bopp Chapel
"We are honored to provide this Book of Memories to the family."
View full message >>>
Send Flowers
Plant a Tree In Memory of Your Loved One
Click Here
Menu

Obituary for Shirley A. Alexander (McVey) 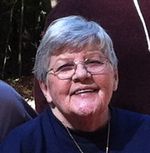 Shirley A. Alexander, age 87, of Chesterfield, Missouri was Fortified with the Sacraments of Holy Mother Church on August 23, 2020.

Shirley was the beloved daughter of the late John D. McVey and the late Elizabeth B. Rogers and sister of the late John D. McVey, Jr. She was predeceased in death by her son, Charles J. Alexander (Margaret). She is survived by her loving children, Debra A. Dinolfo (John), Diane M. Alexander (Seth), Eileen A. Kidder (Tristram), Linda A. Whitcomb, and William J. Alexander (Nadine) and her 6 adoring grandchildren, Erin Kidder, Jonathan Belford (Ellen), Megan Hammond (Paul), and Alissa, Alexander and Adam Whitcomb. She was also loved by other family members including James Nieskoski, Deborah Hereld, Shoshana and Shira Hereld, David Belford, Peter, Liz and Ryah Belford, and Lev Camara (Sayon). She is also survived by her faithful and loving dog, Dizzy who will continue to wait at the door for her to come visit. She was the dearest of mothers and grandmothers. She was a favored resident of Delmar Gardens Chesterfield and the family is grateful for their loving care throughout her residency. We all will miss the 200 wing and all the nurses, aides and staff. And a thank you to the doctors and nurses at Missouri Baptist Hospital who took special care of her in her last days. She will be greatly missed, especially since she was taken too early by this terrible Covid-19 virus.

Shirley was born (October 21, 1932) and raised in St. Louis and graduated from Ursuline Academy. Although she moved around to many different states, in 2013 she returned to her favorite city and home, St. Louis.

Funeral Mass Friday, August 28, 2020, 10:00 a.m. at Ascension Catholic Church, Chesterfield, MO with visitation from 9:30 until the time of Mass. Interment will be at Calvary Cemetery.