In Memory of
Catherine Louise
Schaefer
1931 - 2020
Click above to light a memorial candle. 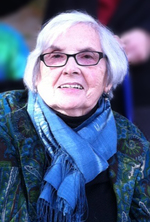 Catherine Louise Schaefer (Stahling) was born the youngest of seven children on a farm near Brighton, Illinois on July 10, 1931. She died peacefully at Brooking Park Skilled Nursing Center in Chesterfield, Missouri on August 31, 2020, at the age of 89.

After graduating from Brighton High School, Catherine (Cathy) married Glennon (Glenn) Schaefer on July 11, 1953 in Alton, Illinois shortly before he started medical school at St. Louis University. She worked as a secretary to help support and raise their growing family while he was in school. She and Glenn moved to Augsburg, Germany in 1957 after he graduated and joined the US Army. They spent two years living in Germany, traveling Europe, and building memories and friendships that lasted them the remainder of their lives.

Cathy lived most of her life in Town & Country, MO where she was known for her love of animals, her sense of humor and style, and her Pez collection. She magnetically attracted stray cats and deer to her yard on Topping Road. Later in life she took journalism classes at UMSL and wrote articles for St. Louis Magazine and the St. Louis Post-Dispatch.

Cathy was preceded in death by her husband Glenn on June 28, 2007, after 53 years of marriage, their son Peter Henry on August 12, 1980, her six siblings Mary Huseman, Clara Rowden, Helen Meissner, Joseph Stahling, Martin Stahling, and Ruth Lile; and her parents Joseph and Mary (Breitweiser).

A graveside service arranged by Bopp Chapel will be held at Our Lady of the Miraculous Medal Cemetery in Dardenne, Missouri, on Saturday, September 5, 2020 at 11:00 am, Father Don Wester officiating.

Memorials can be made to:
Reservation Animal Rescue (formerly R.O.A.R.)
http://www.nativepartnership.org/site/PageServer?pagename=rar_home

or to Stray Rescue of St. Louis, https://www.strayrescue.org/donate