In Memory of
William Robert
Werremeyer
1947 - 2020
Click above to light a memorial candle.
Memorial Candle Tribute From
Bopp Chapel
"We are honored to provide this Book of Memories to the family."
View full message >>>
Send Flowers
Plant a Tree In Memory of Your Loved One
Click Here
Menu 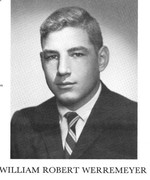 William Robert Werremeyer (Bill), of St. Louis, MO, and St. Petersburg, FL, died peacefully on Saturday, September 12, 2020, at age 73. He is survived by his wife of 45 years Marcia (Hunsinger), two daughters Molly Werremeyer and Betsy (Chris) Dougherty, grandsons Charlie and Jack, loving son-in-law, brother-in-law, uncle, and friend to many. He was preceded in death by his parents, Fred and Peggy, and his brothers Fred, Jr. (Kay) and Dan (Helen).

Bill taught math and coached multiple sports at St. Louis Country Day School (MICDS) for 41 years. His first year was his Dad’s last, and they cherished that time as colleagues. Together they spanned 80 years.

Services will be private. In lieu of flowers, contributions may be sent to the Special Olympics at specialolympics.org or St. Luke’s Hospital at stlukes-stl.com.

For those who remember, raise your glass and sing a chorus of the Country Day fight song.

Bill’s passions were family, teaching, coaching, sports and having fun. He knew from an early age that he wanted to follow in the footsteps of his grandfather, father and brother as a math teacher. He attended St. Louis Country Day School for all its eight years, graduating in 1965, distinguishing himself as a scholar and an athlete.

Some comments from his senior yearbook page: Wee Willie is probably best known as the senior class walking encyclopedia. His vast knowledge of the sports world is such that whenever anyone mentions a game played recently, one immediately gets the Frogmeyer Sports Comment on the game, whether he wants it or not. When Bill’s not talking, though, you’ll find him participating. Willy is probably the most amazing athlete ever assembled. Short, and not fast, Bill compensates with a quick, alert mind, lightning reflexes, and superb coordination. He can swish a basketball from half-court just as adeptly as he drop-kicks the pigskin through the uprights. He earned twelve letters including seven “A” letters while managing to rank academically in the top five of his class. Again, his determination to succeed has been the prevailing factor. With his exceptional record going for him, Bill should have no trouble succeeding at college or afterwards. His scholastic and athletic capabilities coupled with his great personality should insure him many future friendships.

What an accurate prediction! Upon graduation Bill left for Hanover College to play baseball. His Dad encouraged him to try football as well, and Bill always said that was some of the best advice his Dad ever gave him. Bill’s senior year, he was a co-captain and was deemed the ‘stalwart of the offensive line.’ He was also a key member of the baseball team. His senior yearbook says he was “a standout for the fourth straight year, led the team in almost all offensive departments and was elected MVP, and all HCC and NAIA teams.” Bill earned a B.A. in math and graduated in 1969.

When an opening in the CDS math department came up in 1970, Bill applied and was hired. He loved being back ‘home,’ and those former teachers and mentors became colleagues. He was welcomed with open arms. He coached on all levels of baseball, football and soccer and eventually became head of the math department.

The next year Marcia joined the CDS staff. She and Bill became friends, began dating and married in 1975. The all-boy student body and mostly male faculty and staff must have been a bit curious about how their relationship progressed. She knew he was the one when he could beat her at Jeopardy. He might not have been up-to-snuff on the pop culture questions, but he answered those in all the difficult categories like history, monarchs, the Bible and, of course, sports.

The wedding date was November 29 – Thanksgiving weekend – so that out-of-town family might attend. It was also the date of the Missouri State football championship game to be played in the southwest quadrant of the state. Bill assured Marcia and her family that the team was experiencing a ‘reloading’ year and that wedding plans wouldn’t be affected. But… the team kept winning. Questions arose: How many guests would be attending the game? Would the GROOM be attending the game? Fate intervened when, during the final game against Burroughs, a fluke occurred and the game was lost 8-7. Marcia and her family were the only ones on the red and white side of the field who were relieved, and the wedding went on as planned.

Daughter Molly was born in 1981, and Bill became a very proud Dad. The 1982 CODASCO yearbook was dedicated to both Bill and Marcia. The dedication page states: “Anyone who has been in one of his math classes knows the quality of his teaching and what it means to be one of his students.” Daughter Betsy was added to the family in 1983. Bill was so proud of his girls and was a big participant in their lives. He coached them, tutored them, instilled his values in them and loved them.

Some of the highlights:
Spring breaks spent on Lido Key often included at least one shopping excursion. Marcia and the girls dropped him off for 18 holes on the way to the outlet mall. They shopped until he finished the 19th hole when they picked him up. He couldn’t understand how they could spend so much time at the mall. Bill was never an enthusiastic shopper except for the time they took him to the Gant store to buy him new clothes.

Bill never met a stranger. On trips to places where you have to endlessly stand in line for rides and events, Bill would always strike up a conversation with the others who were waiting. The girls were mortified by this. And when it came to finding an audience volunteer to go onstage for a show, how did the actors know Bill would be a willing participant?

Membership in Lindgate Pool was a must after the Werremeyers moved to Kirkwood. The family made rock-solid friendships that remain some 36 years later. When Friday night gatherings became regular social events, all were amazed at Bill’s insistence that a two-topping pizza did NOT mean two on each half. He wouldn’t change his mind that these were 4 toppings! Bill was a pool rat long after the girls had outgrown it. He swam laps, read and (as has been suspected) napped in the sun.

Fast forward to the post-college days. When Chris proposed, Betsy accepted and Bill and Marcia were deliriously happy. The wedding day finally came, and it was so much fun. Bill didn’t so much as give Betsy away but rather embraced his son-in-law with open arms. Bill had finally met his intellectual equal. They shared a love of sports – especially football and baseball – and could discuss some math and science things that nobody else understood. Grandsons Charles William (2011) and Jack Robert (2015) both have his names, not to mention his heart. While Bill cared dearly for his family prior to their births, nothing could compare with the love for his grandsons.

Athletic injuries took their toll on Bill’s knees until a replacement became necessary. Following a December procedure in 2007, Bill and Marcia traveled to Florida for a visit with Betsy and Chris. Since he needed a doctor’s clearance to return to work, Marcia came home, and Bill stayed with them until February. The warm air and heated pool were instrumental in his recovery, and it was this taste of winter in a warm climate that must have planted a seed in his brain.

When he retired, Bill spent a few winter months in Florida to test the waters. When a condo in St. Pete became available, he and Marcia jumped at the chance to buy it so they would be close to the Doughertys. As the weather turned colder in Missouri, Bill became a snow bird who flew south. He made many new friends at The Madison and loved spending time with family – especially joining them for Sunday night dinners, grandparents’ day at Shorecrest, watching practices, attending games and babysitting for Charlie and Jack.

Bill loved to travel, and after the girls had grown, he and Marcia took some great trips. Several to the Jersey shore were spent hanging out with the Werremeyer/Alwood clan. Other trips were for sightseeing. He always was an adventurer and did his homework beforehand to find interesting places to visit. On a trip to the Northeast, he fulfilled a wish to see the reversing falls in St. John, New Brunswick – a phenomenon he taught in one of this classes. Bill made two People To People trips through school – one to Russia and the other to Southeast Asia. Most recently he checked off an item from his bucket list when he visited Machu Pichu.

As his body aged, problems arose. Bill had multiple issues and several serious hospitalizations, however his long-time primary care doctor/magician/friend – along with a team of specialists – always managed to pull the rabbit out of the hat and put Bill back on his feet. This last time was just too much, and after two weeks in the hospital and three days in hospice, Bill passed away.

His intellect, his interest in sports, his determination and his ability to make friends WERE the basis of his life. His love of family, teaching, coaching, sports and having fun continued to the end. Bill has influenced countless young men and women. He has made more friends than one could imagine. He will be admired, respected – and missed – by so many. Such a remarkable man.