In Memory of
James Christ
Tompras
1936 - 2020
Click above to light a memorial candle. 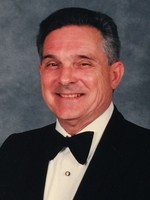 Jim became the head of his childhood household at the age of seventeen (17) after his father passed away. He operated the family business, Valeteria Cleaners, while attending school and while working his primary job post-graduation. He attended Christian Brother’s College High School (H.S.) in St. Louis, graduating in 1954 as Cadet Colonel.

A member of the St. Nicholas Greek Orthodox Church community his entire life, Jim served as Senior Acolyte and Church Board member. Was married to his beloved wife Eftihia at St. Nicholas in 1958 and enjoyed 61 years with her before she passed away in 2019.

Jim loved baseball (especially Cardinals baseball) and was the coordinator of the celebration parade for Lou Brock in 1974 after Brock broke the single season record for stolen bases and Jim ended up in the parade as “Brock’s Biggest Fan”. Jim also enjoyed St. Louis Blues hockey, music, going to Walt Disney World with his grandsons, taking photos and home movies and creating countless hours of family movies to hand down to generations of loved ones.