In Memory of
Janis S.
Dunaway (Stone)
1941 - 2020
Click above to light a memorial candle.
Memorial Candle Tribute From
Bopp Chapel
"We are honored to provide this Book of Memories to the family."
View full message >>>
Send Flowers
Plant a Tree In Memory of Your Loved One
Click Here
Menu 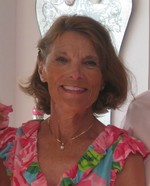 Janis Stone Dunaway, 79, of St. Louis, Missouri passed away peacefully, surrounded by her loving family on September 18, 2020. Jan was born on March 22, 1941 to Helen and Harry G. Stone and graduated from Kirkwood High School in 1958. Jan pledged Kappa Alpha Theta and was crowned Savitar Queen at University of Missouri and it is at college where she met the love of her life, Terry Dunaway. Married in 1962 and selling all of their possessions, Jan and Terry set off on an adventure to travel the world together. Upon returning to St. Louis, Jan taught high school English, received her graduate degree in counseling and became a Stephen’s Minister at Central Presbyterian Church. But her greatest accomplishments were her three children and six grandchildren who meant the world to her.

Wife, mother, grandmother, sister, counselor and friend to so many, Jan was an eternal optimist and truly embodied the I am Third life. Family traditions were especially important to her, and she always found a way to make every celebration fun and meaningful. Jan spent 28 winters in Boca Grande, Florida where she became an active member of the Women’s Club and First Baptist Church, as well as a determined shell seeker.

Jan is survived by her husband, Terry Dunaway; her daughter, Heather Mikula (Matt); son, Tyler Dunaway (Amy); and six grandchildren, who she referred to as her Darling Dumplings, Grace, JD and Henry Mikula and Teddy, Charlie and Jane Dunaway. Jan was preceded in death by her daughter, Beth.The family would like to gratefully acknowledge her loving caregivers Debbie, Jan and Tracey.

A private service will be held later this week. In lieu of flowers, gifts can be made to Central Presbyterian Church, 7700 Davis Drive, Clayton, MO 63105 or First Baptist Church of Boca Grande, 421 4th St W, Boca Grande, FL 33921.