In Memory of
Evelyne Jarratt "Jarry"
Maughs (Smith)
1916 - 2020
Click above to light a memorial candle.
Memorial Candle Tribute From
Bopp Chapel
"We are honored to provide this Book of Memories to the family."
View full message >>>
Send Flowers
Plant a Tree In Memory of Your Loved One
Click Here
Menu 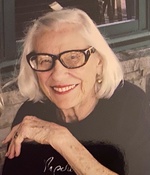 Maughs, Evelyne Jarratt “Jarry”, passed away peacefully on October 1, 2020 at the age of 104. Beloved wife of the late Dr. Sydney B. Maughs; loving stepmother of the late Lynn Schroeder (Randy, current wife Hae Jeong), loving mother of the late Edward J. “Ned” Maughs (Sherlyn, current husband Gary Freiermuth); Devoted grandmother of Delainey Maughs, Darcy Patterson ( Kevin) and Brian Schroeder (Stephanie) and devoted great-grandmother of Sterling and Quinn Patterson, Sydney and Margot Schroeder.
Jarry was Born on September 8, 1916 in La Port, Texas. She spent much of her youth in Paris where she began what would prove to be a lifelong love affair with France. She graduated from Rollins College in Winter Park, Florida in 1939 where she was very active in athletics and was a founding member of the first ever women’s rowing team in the south. She was an officer of the family owned business the Dr. J. H. McLean Medicine Company, during the 1930s and 1940s. Jarry married her dear husband Sydney in 1946 and was by his side for 57 years until his death in 2003. For most of those years he was engaged in the practice of psychiatry in the St. Louis area.

Jarry had many passions which included a lifetime of travel around the world, including such experiences as seeing the treasures removed from King Tut’s tomb and on safari in Victoria Falls. Until her death she was one of the few living people that seen singer and dancer Josephine Baker perform live in Paris in the late 20’s. She loved her many dogs over the years. She gave to over 35 charities and worthy organizations. She loved everything French and vacations in Monterrey, Mexico. She couldn’t get enough big band era music. She loved going out for lunch or dinner. But most of all, she loved her dear friends and family, her children, grandchildren, and great-grandchildren and all those family get-togethers. For her 100th birthday, a theme party was held for her with family and friends coming from seven different states. The theme was France, of course! Everyone came in costume as their favorite French character, fictional or otherwise. Jarry loved seeing Marcel Marceau, Lady liberty, Inspector Clouseau, the Three Musketeers, Beatnik‘s, Chef‘s, et al.

Jarry was a pure delight to all who knew her. She loved to laugh and made everyone around her laugh. She never thought she would live so many years after her beloved Sydney, but she did. And her family and friends were grateful for those “extra years” with her. The family would like to acknowledge several of Jarry’s loving and caring friends, her deceased best friend and sister since age 4, Grace Crews, her daughter Grace “Gay” Corbin (Gary), and her dear long time dedicated companion and caretaker Belin Mauer. Tim Swank and Isabel Allen were Webster neighbors who continued to be an important part of Jarry’s life for over 50 years.

In lieu of flowers it is requested that donations be made to Glendale Presbyterian Church, St. Agnes Home, or a charity of your choice. Interment will be private at Bellefontaine Cemetery, beside her husband Sydney and children Lynn and Ned.
A memorial service may be held dependent on future circumstances.