In Memory of
Janet Elizabeth
Harvey (Dowd)
1938 - 2020
Click above to light a memorial candle.
Memorial Candle Tribute From
Bopp Chapel
"We are honored to provide this Book of Memories to the family."
View full message >>>
Send Flowers
Plant a Tree In Memory of Your Loved One
Click Here
Menu 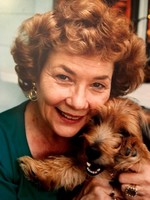 Janet Elizabeth Harvey, (nee Dowd), 82, passed away peacefully of natural causes October 17, 2020 surrounded by her family.
She was born and raised in Glendale, MO to William and Mae Dowd. Janni is survived by her brother Capt. Gregory Dowd, USN (Ret), her sister Sue (Patrick) Lauber-Fleming, and her sister Dori Dowd Kelley.
Janet graduated from Kirkwood High School in 1955. She then attended Southeast Missouri State University, where she was an active member of the Tri Delta Sorority, The CLIO Society and the cheerleading squad. She earned her degree and graduated in 1959. She met and married her first husband, Tom Brennecke, with whom she had three children. She was a loving Mother to Tom “Tee” Brennecke of Ballwin, Christy (Dan) Prasuhn of Kirkwood and Jeff (Ginger) Brennecke of Ballwin.
Jan was a Human Resource Manager for BT Buschart Office Products for many years until she retired. She made a lot of wonderful friends during her years there. After she retired she would still meet up with them at The Village Bar for a burger and a cold one.
The little dog pictured with Jan is her long- time companion, Gilly. They were together for 14 years.
When Jan started dating Sam, she said she knew “He was the one”, because when Sam showed up to take her to dinner, he was introduced to Gilly and the dog licked his hand. That was the beginning of their life together.
She married Samuel V. Harvey, Jr. The two of them enjoyed many years of travel, family float trips,
Bar-B-Ques and spending time with their blended family. They made many friends and many fond memories owning The Village Bar in Des Peres.
Survived by her grandchildren, Nick (Ahlam) Schaerer of Kirkwood, TJ, Michael and Bobby Brennecke of Ballwin, Ava and Hannah Brennecke. Great Granddaughters Deena and Leena Schaerer. To them she was known as Schatzy (Sweetheart) and they were known as Schatzy’s Angels. If one of them misbehaved she would be quick to joke and tell them that their Halo was on crooked. It was always ongoing fun. She will be dearly missed.
Janet is preceded in death by her parents, her brother Richard Dowd, her husband Sam Harvey, her
son-in-law Rich Poike and grandson Alex Poike.
Janet, Jan, Janni, Sister, Mom, Aunt, Cousin, Schatzy, however she was known; she was very dear to so many and will forever be in our hearts.
A private ceremony will be held October 30, 2020 for the immediate family at Jefferson Barracks Cemetery where she will be laid to rest with Sam.
In lieu of flowers, contributions to the Alzheimer’s Association or Parkinson’s Foundation in Janet’s memory are greatly appreciated.