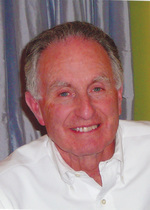 Fortified with the sacraments of Holy Mother Church, Christopher Kearns Reid passed away peacefully on October 30, 2020 in St. Louis, Missouri at the age of 79 with his family by his side.

Chris is survived by his wife of 55 years, Jane Finn Reid; his two sons Christopher (Jennifer DeLaney) and Mark (Julia); grandchildren Miranda, Aidan, Evan and Theodore; and his siblings Donald, Connie, and Doug. He is preceded in death by his parents Donald F. Reid and Betty Reid, and by his brother Britton.

Born in Cleveland, Ohio on November 2, 1940, Chris moved to St. Louis when he was 8 years old. He attended Mary, Queen of Peace grade school, where the Sisters of Loretto tried to keep him out of mischief. His respect for the sisters did not stop him from escaping an after-school detention through a second-story window and running to Holy Redeemer so he could make his 8th grade basketball game. He graduated from Coyle High School, and then the University of Notre Dame. He and his freshman dorm floormates led their intramural basketball team to the university’s intramurals final, where they faced a team of Notre Dame football players. Chris did not remember getting many favorable officiating calls in that game.

Chris met Jane, the love of his life and then a sophomore at SLU, during his senior year at Notre Dame while home visiting over Easter. Chris attended SLU Law School, and Chris and Jane saw each other nearly every day for Mass and lunch for the following three years. Chris and Jane married in September 1965. Chris served in the U.S. Army from 1965-1967, achieving the rank of Captain. Chris and Jane returned to St. Louis and to MQP parish in 1967. Chris began his law career in the trust department at Boatmen’s Bank, and then moved into private practice. He practiced law for over 40 years, serving clients in the areas of business, tax and estate planning. His clients remembered Chris as someone they knew they could trust and who would always do the right thing.

Chris loved spending time with family and friends, and will be remembered for his warmth, charm, kindness and quick wit. He traveled all over the world with Jane while insisting that Elvis’ home in Graceland was his favorite place to visit. He coached his sons in basketball at MQP, and served as President of the St. Louis Priory Fathers’ Club. He enjoyed school and sporting events with his children and grandchildren, as well as treating them to his famous pancakes. Chris was an outstanding golfer with six career holes-in-one, and more importantly was a convivial addition to any foursome. He greatly valued his lifetime friendships made at Greenbriar Hills Country Club. Chris’s Roman Catholic faith community at Mary, Queen of Peace was at the center of his life. He was a devoted St. Vincent De Paul and Meals on Wheels volunteer.

Services will be private. Please consider memorial contributions to the Mary, Queen of Peace Conference of the Society of St. Vincent De Paul (www.mqpwg.org) or St. Louis Priory School (www.priory.org).