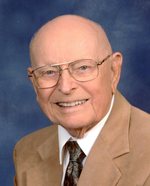 WOLLING, Spencer C. (Spence)
passed away peacefully on November 1, 2020 at the age of 96. Born November 18, 1923, only son of J. Spencer and Marjorie Wolling. Preceded in death by beloved wife Mildred (Scheer) Wolling, married over 64 years. Survived by daughters Barbara of Perry, Iowa and Susan of Eugene, Oregon. Preceded in death by son Mark (Big Wally) of Jackson Hole, Wyoming.

As an engineer he worked on the expansion of natural gas service to St. Louis with Mississippi River Fuel Corp. in the 1950’s and then joined his father, a lawyer and CPA, and obtained his own CPA. He joined Huber, Ring and Wolling, CPA’s and became a partner. He then joined L.E. Sauer Machine Co. and became Vice President of Finance until retirement in 1993. He enjoyed several sports, but primarily golf. He had three holes-in-one and shot his age regularly the last ten or more years, at his home course Westborough C.C. He was a 50-year-member of First Presbyterian Church of Kirkwood and served as Deacon, Trustee and Elder. He and Millie moved to Laclede Groves in retirement and had many happy years there with lots of new friends.

Services: A virtual memorial service will be held at 10:30 a.m. on Wednesday, November 18 at www.kirkwoodpres.org and archived for later viewing at that site. His body will be cremated. In lieu of flowers, donations may be made to First Presbyterian Church of Kirkwood or the Salvation Army.