In Memory of
Virginia Anne
Allen (Cooley)
1924 - 2020
Click above to light a memorial candle.
Memorial Candle Tribute From
Bopp Chapel
"We are honored to provide this Book of Memories to the family."
View full message >>>
Send Flowers
Plant a Tree In Memory of Your Loved One
Click Here
Menu 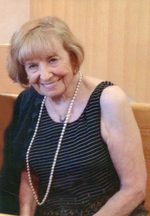 The family and Care Team of Virginia Allen (Ginny) mourn her loss after a very long illness and battle with Parkinson’s. Born Virginia Cooley in St. Louis and graduating from Soldan and Washington University, she was a life member of the Cooley Family Association of America. She was a world traveler, social worker, opera and symphony lover, daughter, mom, gram, great-gram, cousin, aunt, dancer and friend. Predeceased by her parents, Anna and Richard Cooley, her husband, Douglas Allen, and her sons Richard and William Notbohm. Ginny’s remaining family include her daughter and son-in-law, Nancy Tinsley and Brian Clinch, sister-in-law, Venita Loftin, seven grandchildren and their spouses, sixteen great-grandchildren, two nephews, Brent and Steve Wade, and their families and many cousins and friends. A memorial service will be announced at a later date to celebrate her life. In lieu of flowers, memorials may be made to the American Parkinson's Disease Foundation, St. Louis Chapter, 660 S. Euclid Ave., St. Louis, MO 63110 or at www.apdaparkinson.org. Feel free to leave online condolences located in condolences and tributes on website.
Printable
Share on Facebook
Current Services
Why Come to Us
Funeral Planning
Grief & Healing
Help & Guidance
Announcements
Missouri Funeral Directors and Embalmers Association National Funeral Directors Associations Missouri Funeral Directors Association