In Memory of
Mykell
Hudspeth
1995 - 2020
Click above to light a memorial candle.
Memorial Candle Tribute From
Bopp Chapel
"We are honored to provide this Book of Memories to the family."
View full message >>>
Send Flowers
Plant a Tree In Memory of Your Loved One
Click Here
Menu 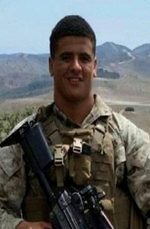 Mykell Joshua Hudspeth
April 14, 1995 - November 3, 2020
Mykell Joshua Hudspeth was born, April 14, 1995, to parents, Michael Hudspeth, Sr. and Carlynn Brown Hudspeth in St. Louis, MO. He was baptized at St. Alphonsus (Rock) Catholic Church. Mykell was raised in Brentwood, MO with his Grandmother, Kathleen Brown (Emom) who preceded him in death. He went to Mark Twain Elementary and Brentwood High School and graduated in 2013.

Mykell’s favorite activity was wrestling where he excelled and went to State 3 years in a row. Even though he never won state, he was extremely influential as an athlete and leader on his team. At the end of each season, he donated his shoes to an under classman wrestler that he felt excelled as a team leader and wrestler. His coach is setting up an award to continue this tradition.

After graduation, Mykell went into the Marine Corps and was stationed at Camp Pendleton in California. He was on deployment to nine different countries including; Cape Horn, Djibouti, Philippines, Dubai, Guam, Seychelles, Papua New Guinea, Sri Lanka, Bahrain and Kuwait. Continuing his military career he enlisted in the US Army.

He attended One Station Unit Training (OSUT), completed Airborne School, earned his MOS of 19D Calvary Scout and became Staff Sergeant (SSG) in the Anvil Troop, 1-16 CAV Regiment. Mykell met and fell in love “at first conversation" with Robin Elizabeth Micheli who became his wife on January 2, 2020. They enjoyed their life together with Riley, their spoiled dog whom he called his “baby girl”. The two enjoyed their patio garden, exploring new places, meeting new friends and eating good food. Mykell was dearly loved by everyone who met him and acquired numerous nicknames throughout his life including; Kells, Kelly Kell, Bam-bam and Pumpkin Head.

Mykell was reunited with his brother, Michael Hudspeth, Jr. (who preceded him in death), and Emom on November 3, 2020. He leaves to cherish his memory his wife Robin (Micheli) Hudspeth, his mother, Carlynn Brown Hudspeth, father, Michael Hudspeth, Sr., four sisters, LaSeanna Hudspeth, Mikia Hudspeth, Jazlynn (Hudspeth) Tate and Raven Hudspeth; half sisters and brothers, Seantell, Precious, Joann, Michael and Malik as well as a host of aunts, uncles, cousins, nieces, nephews, brothers in arms, and friends.

Mykell will be greatly missed but we know he is finally at peace and watching over us.