In Memory of
Beverly Arlene
Weiss (McElroy)
1929 - 2020
Click above to light a memorial candle.
Memorial Candle Tribute From
Bopp Chapel
"We are honored to provide this Book of Memories to the family."
View full message >>>
Send Flowers
Plant a Tree In Memory of Your Loved One
Click Here
Menu 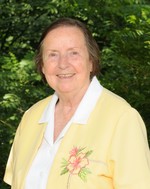 Beverly A. Weiss, recent resident of Delmar Gardens Creve Coeur, entered into the presence of the Lord peacefully on Tuesday, November 10th at the age of 91.

Born to Kenneth and Grace McElroy on June 27th, 1929 in Pittsburgh, Pennsylvania, she spent most of her life in that city. After working on an associate degree in business for two years after High School, Beverly married a West View High School classmate, William J. Kennison, on January 16th, 1948 and shifted her attention to being a wife and mother. Her four children, William, James, Michael, and Susan kept her very busy while also assisting her husband in his many home and community projects.

At the height of her family activity she was widowed in 1967 and raised her family on her own. During this time her faith and her engagement in serving her church became a central focus in her life. She especially used her notable skill as a vocal soprano in the church choir, for singing had always been her great love. Her many projects began to shift towards the care of others, from care of aging family members to poor neighbors to strangers needing assistance. After seven years of widowhood, Beverly met and married Elmer Weiss. Elmer, who was a widower, had three daughters, Susan, Marilyn, and Gretchen. It was through Marilyn’s marriage to Beverly’s son Bill that Beverly and Elmer had become acquainted. They shared a life of family and faith for ten years before Elmer also passed.

While caring for her aging mother, Beverly returned to work, doing billing and accounting at Geoffrey Boehm Chocolates, a family business owned by fellow church members. With her children grown and largely scattered as far as California, Florida, and Jamaica, Beverly had greater time to serve her church as a deaconess, to attend to her step-daughters and their families, and to visit her six grandchildren. She regularly shared her faith and brought numerous people to trust in her Lord. She cared for her neighbors and volunteered at the local nursing home as a caregiver.

By age 80 Beverly had invited her sister Dee, who had recently lost her husband, to live with her, and the two supported one another for several years before Dee’s passing. During this time Dee also had put her faith in Christ Jesus through Beverly’s loving influence. Soon after Dee’s passing, Beverly began to experience early effects of dementia, and determined that she could no longer live on her own. She joined her daughter Susan and her husband Fred in West Virginia, helping on their farm for nine months, before the decision was taken to move her to St. Louis to be with son Michael and his family. Her deepening memory loss required skilled care, first as a resident of Sunrise Assisted Living and then at Delmar Gardens, Creve Coeur. In spite of deepening confusion, Beverly never lost her habit of caring for others, doing her “rounds” throughout the day, singing and telling staff and residents she loved them.

Due to Covid-19 restrictions, a private service will be held for Beverly at The Kirk of the Hills Presbyterian Church at 10:00 AM on Saturday, November 14th.

In lieu of flowers, memorial contributions may be made in Beverly’s name to The Kirk of the Hills Missions Fund, 12928 Ladue Rd., St. Louis, MO 63141.